I stopped drinking milk before it was popular to do so, back when regular grocery stores didn't carry soy or anything. My family had to go to Trader Joe's (which was about two hours away) and buy a case of soy to last us until our next trip over. Then at some point we all switched to almond (soy's rather chalky after you stop drinking it, though almond does have a nutty flavor that occasionally gets in the way--but there is more organic almond for sale than organic soy). So Christmastime is pretty much the only time when I still buy milk, in the form of egg nog, that is.

It took time to even realize whether or not I liked egg nog. I just had to buy one small carton each year for a while, just for the tradition of it. It has such a strange, thick texture that it's entertaining somehow to drink it. But now I tend to still buy the one carton of milk egg nog and then supplement it throughout the season with different brands of soy or almond egg nog to see which one tastes most like the regular milk kind. It's kind of a game now.

And then I saw this bottle at World Market. It's wine nog. I've only had one kind of alcoholic egg nog (the kind they sell at Costco) and I thought it was horrible (too much like alcohol rather than a spiked drink). So why I should get excited at this bottle, I don't know. . . . Oh, yes, because it is also chocolate nog. With mint. And made with cream. Shouldn't that be too much flavor to maintain the regular egg nog taste? Well, it still sounded really good to me, maybe because the chocolate-milky liquid in the bottle looked like a chocolate wine from World Market that I did enjoy a few years ago.

In taste, first this drink is sweet, then the alcohol comes in and that milky/creamy chocolate flavor, and then the milk. I don't know that it tastes specifically like wine; it just has that mild alcoholic taste to show that there is something besides cream and mint.

While this nog is sweet, it isn't sweet like dessert wine; rather, it is sweet like an actual dessert. The sweetness pairs with the cream and the chocolate just as it would in a dessert. So the chocolate isn't overly pronounced and maybe not even the dominant flavor--but I like the proportions as they are because this keeps the drink light and casual. 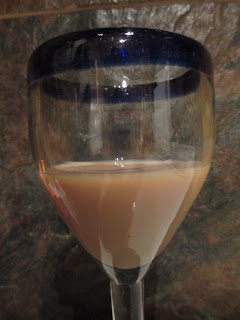 Once again we come to the question: is it like egg nog? Kind of. It has some of that thicker, creamier consistency that definitely puts you in mind of egg nog. But the flavor reminds me less of traditional egg nog because I'm not paying as much attention to the spices as to the chocolate and mint--which is the idea, after all. But there is enough of that spiced flavor to taste like the holidays.

Overall, I quite like it. I find that I can't drink much of it, whether it's because it's alcohol or because it's sweet (or a combination) I'm not sure. But it would be nice for a party, maybe because it's alcohol without really feeling like alcohol; and if your guests are like me, you can just split one bottle into small portions and you'll all be happy. It would be great with dessert, whether a flourless chocolate cake or gingerbread men or something lighter like sponge cake or vanilla ice cream. Or just let it be dessert in itself.
Posted by Deanna Skaggs at 8:46 PM