Twilight Company & the Wars in the Stars

I knew this was probably a book I could skip but I wanted to read all the Star Wars books that came out this year. Even still, when I picked it up to buy at the bookstore, I hesitated over seeing the cover in person: it just looks like a book I wouldn't be interested in. But I got it, anyway. 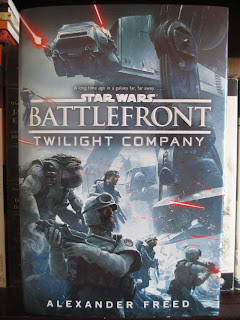 Anyway, the fact that the book is based on a video game isn't exactly what made it not my type of book. It's the battle and military focus that wasn't quite in line with my interests: I like the drama, the literary qualities, and the character arcs in Star Wars more than the actual wars. And this book is all about one battle after the next. First they go to this planet and fight, then this planet, then that planet. Maybe a battle in space in between. Morale in the company is low and then it goes back up and then it's low again and then it goes back up. All kind of monotonous to someone who isn't interested in military stories.

When I started reading this book, I had three weeks until Episode VII was going to come out. So I figured I would read the book in a week and then have a couple of weeks to rest from my Star Wars book marathon of the last several months. It didn't quite happen that way. I spent the first two weeks just getting through the first fourth of the novel. Then I spent about three days on the middle half. And then I read the last fourth yesterday in a desperate attempt to finish before the movie's opening day (even though I don't think I'll be watching it until Saturday).

So suffice it to say, as I'd expected, I had trouble getting into this book. But you know, in those last couple of days I think it did start to draw me in, in its own way. The characters were starting to feel like people: I felt like I was watching them in a TV show, like they were tangibly there, moving from one episode to the next. And it is always kind of nice to get a new perspective on the Star Wars events that we're all used to. The main force of the Rebellion plays out certain battles, but Twilight Company does a lot of dirty work and a lot of widespread work on the many, many planets under the Empire's hold. (Side note: for this being a military book, it wasn't graphic about the wounds and fighting--other Star Wars books I've read this year have been more graphic, which was kind of surprising.)

And now I'm officially read for Episode VII. Which, in turn, means that starting tonight, I think I'll hide from the Internet for the next couple of days until after I've seen the movie. You never know where spoilers will appear.