I love it when people bring me back chocolate from their travels. I've only been to Colorado once, when my plane landed there for a connection and I had to run to the gate because the first plane had left late due to weather conditions--I made it, even though it was past the time that the doors were supposed to close. While I've been to few enough states that I consider this brief moment to have been time in Colorado, I realize that I haven't really been to Colorado. 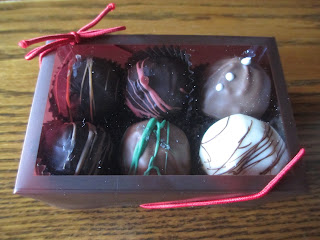 But these chocolates are from Colorado, deep in mountains in the "Switzerland of America," also known as Ouray. The company? Mouse's Chocolates & Coffee. Cute name. Cute logo. Basic style to the boxes and the chocolates. They look like simple confections, like what you might find at any little chocolate shop in any city. I took pictures and arranged them and didn't think about much. But then I began to taste them and I realized there was something more to these simple chocolates. 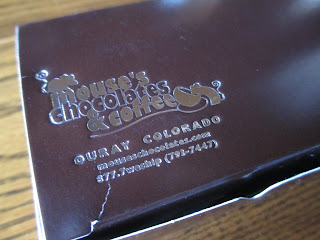 I can't remember now which one I had first (I didn't think, in this case, I would need to take notes like usual). So let's start with Peanut Butter (dark chocolate with milk chocolate stripes). A lot of the times, I'll prefer a Reese's cup to peanut butter chocolates: Americans are so used to that salty, crumbly peanut butter filling that the more creamy, buttery ones just don't seem quite right. That's the type of filling I was expecting here, but it isn't what I found. The texture is actually quite similar to real peanut butter, softer than what's in a Reese's cup but not too buttery; and there is just the right light hint of salt to distinguish this chocolate from others. 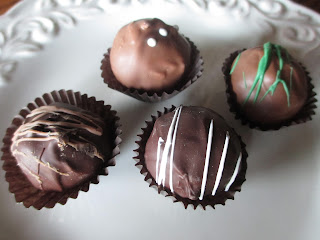 The other two are seasonal flavors, starting with Gingerbread (milk chocolate with three white dots that mimic the buttons on a gingerbread man). Good work with flavor here. The ginger comes in nice and fresh, accompanied by the other usual spices and the warmth of the chocolate. As I learned with Theo's Gingerbread Spice bar a couple of years ago, the gingerbread flavors work especially well with milk chocolate. Put them in the right balance, as they are in this chocolate, and you have a winning holiday confection. 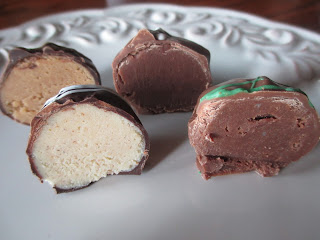 But if the flavor work was good in the Gingerbread chocolate, it's excellent with the Egg Nog one (dark chocolate with white stripes). I seem to have tried at least one egg nog chocolate before, but when it was is escaping my memory, so maybe this one is the first. Either way, I have nothing to use for comparison besides egg nog itself. And even to egg nog itself this chocolate stands tall. The filling is white and a little stiffer than the fillings on these other chocolates. And it hits all the points of egg nog right on the dot: the thick texture, the almost eggy flavor of cream, the nutmeg in the center with other spices on the edges. Very well done and amazing, definitely the best of the four.

So I was kind of wrong. I was expecting basic confections like the kind you'd find anywhere. But these are nicely done confections. The simple flavors are balanced well enough to be a step above the usual, and the seasonal flavors have a lot of thought put into them to have exactly the taste that you'd expect from gingerbread and egg nog. If at some point I actually set foot on Colorado's soil and made my way all the way to Ouray, I would definitely make a stop at Mouse's for some more chocolates.
Posted by Deanna Skaggs at 2:19 PM