I might make some mention of Episode VII, so be cautious if you haven't seen the movie yet.

I'll come in with another chocolate review next post, but for now while I'm still recovering from Christmastime, here is the latest Star Wars read. Before the Awakening came out on the same day as the movie, and I was only able to buy it that weekend because Wal-Mart is carrying it right now (I can't wait until I can go to Barnes & Noble this week to buy the movie art book--no, I don't want to buy it online). So in this case, thank you, Wal-Mart. 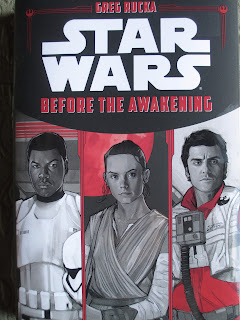 Although it's a short book like the Luke, Leia, and Han Solo adventure books (with the same red and black color scheme), it took me a few days to read it since it was Christmastime. Monday I was baking cookies, Tuesday I was trying to finish off regular tasks, Wednesday I think I was finishing some gift-wrapping, Thursday I was cleaning and prepping a turkey, Friday was Christmas (and the Doctor Who Christmas special, which I watched at midnight), Saturday was a day of rest (also the day in which I finished reading this book), and I can't quite remember what I did yesterday. So. It's a quick read if you have the time to sit there for a few minutes reading.

In a way, it feels like this book had more content than the previously-mentioned three. Maybe it feels that way because the trio are already established characters who were just having separate adventures in those books, while the new trio of this book is still, well, new. Even after seeing The Force Awakens, we still know only so much about them. So anything we glean about who they are (not just their identity, but also their character, since their characters are still being established) is significant.

Poe is the most established character. In the movie, his identity isn't really mysterious and his character is so straightforward as to be quick to establish. And this book explains his backstory. Finn, though not quite as straightforward, is also not too mysterious. The book takes off from what we know about him already and provides a look at the time before the movie scenes, showing that his decision wasn't quite spur-of-the-moment. Rey being the most mysterious character also has the least backstory in here: we just see her scavenging on Jakku and learn more about her state of mind than her identity or her history. It makes you realize more where she is emotionally and in terms of hope and resolve than anything else.

Each story was told on its own: the first section is for Finn, the second for Rey, and the third for Poe. Rey's was by far my favorite section (I love characters walking around the desert, I really do--battles are less interesting to me), and Finn's was probably my least favorite (part of the reason might be that it was a little dragging to keep reading him as FN-2187, though of course it's necessary for the story). For being such a short book with such a quick look at these characters, this story is a nice after-the-movie read to feed your craving for more without really taking away from the ultimate mysteries.

Posted by Deanna Skaggs at 1:05 PM