Goodness, is it going to be Valentine's Day tomorrow already? And I just barely have my Valentine's chocolate review up today? (In my defense, I was going to do it yesterday but the Internet was out all evening.) Anyway, Valentine's Day means very little to me (hence its absence from my What Do You Celebrate? series), so it isn't such a bad thing to be so late about it. 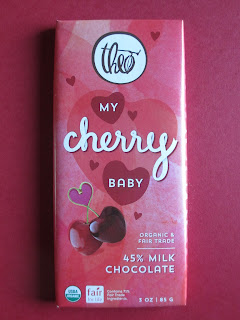 The chocolate in question today is one of Theo's holiday bars, the usual 85 gram size in the usual paper wrappings (it's just under $4). The design of the wrapper, though, is much simpler than it was for the Christmas bars. The My Cherry Baby design has a simple, red, patterned background with three hearts that mimic a Valentine's Day card or conversation hearts. Underneath is a glossy pair of cherries that form a heart shape with their stems; these cherries remind me of the simple yet effective designs of Theo's regular chocolate bars.

Per usual, the bar is divided into eight squares. It's also Theo's standard 45% milk chocolate (which I've always seen people love). For the cherry element, there are both dried sour cherries and freeze-dried cherries. Their flavor comes in instantly, possibly even before the chocolate does; after this, the two move back and forth in dominance so that you are always thinking of both flavors at once while still tasting each of them. 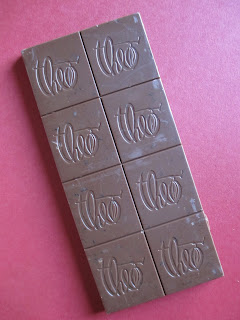 The flavor of the cherries tastes as if they are freshly dried, nice and flavorful and soft, not oddly or stiffly chewy or crunchy. Just a little tart, just a little sweet. The chocolate is much the same as the cherries in this respect: it's sweet because it's milk chocolate but not very much and it has some nice richness of flavor, too. So the pairing is perfect.

It's a nice and simple chocolate and in a way there isn't much to say because it's just right, balanced well and made with great ingredients. Also it is rather nice that Theo has chosen to make this bar with cherries--there are so many strawberry and chocolate pairings around this time of year (which I do, however, like) that it's nice to see something else on offer. Cherries might be a little more of a risk to put together properly but they're carried out so well here that I think everyone will love this bar. 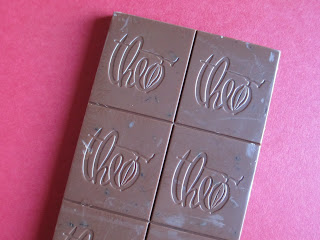 I have to say once again how much I love that Theo is making all of these holiday bars. Sometimes you want a holiday chocolate but you still want it to be good. Valentine's chocolate (at least out here) it some of the worst. Cheap, mass-produced, full of sugar and oil, and hardly reminiscent of chocolate at all--and a lot of it's worse than regular candies like Reese's Cups and KitKats. So here Theo has given us another option: good quality, organic, and fair trade (Fair for Life certification) chocolate. In case you were wondering, 71% of the ingredients are fair trade; the exceptions are the cherries, sunflower oil, and rice flour (the oil and flour are part of the dried cherries).

The 45% chocolate is perfect, too, because it will appeal to both milk and dark chocolate people because it has much of what is appealing about both types of chocolate. Just a very well done and very well thought out bar of chocolate. It's a good product and it's good for the market.
Posted by Deanna Skaggs at 9:43 AM