Arizona was so dry of chocolate for too long. Now it looks like there are some chocolate makers coming in at last. Zak's Chocolate opened last year in Scottsdale, and I need to pay them a visit when next I have the chance. And though I don't know exactly when Xocolatl Confections in Phoenix opened, I imagine it was relatively recently since I hadn't heard of them until yesterday. Yesterday I was at the Glendale Chocolate Affaire, which happens every year but involves more candy and sweets than actual chocolates. This was only my second time going, and I like to go for the antique stores as much as for the chocolate (because, like I said, there isn't much chocolate). Come to think of it, Xocolatl was the only booth I bought anything from (not including lunch, that is). 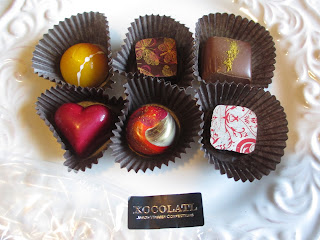 Their booth had two big signs that labeled all their chocolates, the regular chocolates on one side and the caramels on the other side (this event gets very packed, so even as it was, it was a little difficult to look at all the flavors and choose which ones to get). They were for sale either individually or in boxes but since I wanted both chocolates and caramels, I just got them as individual pieces (and what's worse than choosing a whole box and then finding that you don't like any of them? I wanted to try almost everything, but sometimes it is good to be cautious just in case). 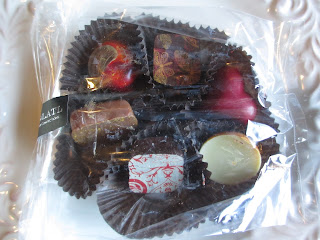 Since I was getting just individual pieces, they came in a clear bag sealed with the Xocolatl label. They were packed in here quite nicely; I was the one who knocked a couple of pieces over (and I probably shouldn't even be including a picture of them in the bag since I'm the one who made them look so messy). The chocolates themselves are just beautiful. With just the right amount of color and pattern and shaping, they're classy and enticing. Two of the flavors (Caribbean Rum with the shiny red top and Raspberry with the white and red patterned top) were my friend's; I just included them in the picture because they look nice. These four were mine: 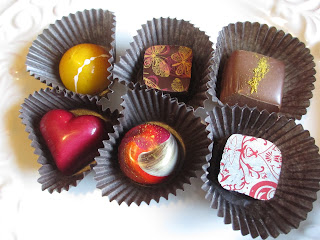 Caramel (Banana) - I have a booklet that names all of the flavors of the chocolates, but not the caramels. Either they forgot to give me the caramel booklet (since I only got one caramel) or they didn't have one for those. So since I didn't take a picture of the signs, I don't remember the exact name of this one or the description. I just got it because I always get banana chocolates since they're less common. It's milk chocolate with a yellow powder in a stripe on top. Though the caramel looks and tastes great, fresh and light, it turns out that the powder is a very flavorful spice that is not at all to my palate. I should know what it is; I recognize the taste; I just can't name it. The banana caramel is good: the flavor comes off well and the milk chocolate adds a little sweetness. And it's all fine except that I can't take that spice. So this wasn't the right thing for me to try. 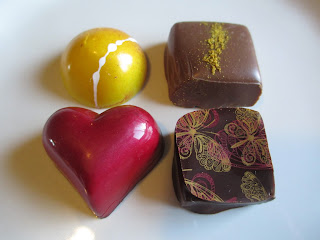 Venezuelan Noir - Now for something plain, described as "intense 73% dark chocolate ganache made of single origin Venezuelan cacao." The dark surface has a light red pattern with yellow butterflies. The ganache looks smooth and clear and as soon as you taste, the taste hits you with fruity flavor notes. These soon fall into a rich, chocolate taste that has very much of the flourless chocolate effect. The texture, as it looks, is extremely smooth; that ganache is like glass in how cool and flawless it feels. A pretty good chocolate. 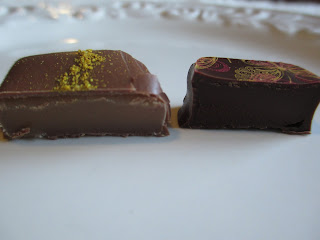 Bananas Foster - "White chocolate with bananas flambeed in Bermudan rum and brown sugar." After trying the Bananas Foster from Disneyland's 60th Anniversary truffles, I was curious to try another version (and, as I mentioned, I'm always curious to try banana chocolates). This one is painted in yellow with orange specks to one side and a white dotted stripe along the middle. Again, the banana taste is carried out well; the rum taste follows in, then the white chocolate, and then a weird taste for half a second before the white chocolate carries on again. I can't quite put my finger on that weird taste; it's just something small in the background, maybe representative of the cooked sugar. But the truffle captures quite well the exact taste of the plantains that my family fries on the stove with brown sugar. It's decidedly sweet but not too sweet. Without that one small, odd taste, this one would be pretty perfect. 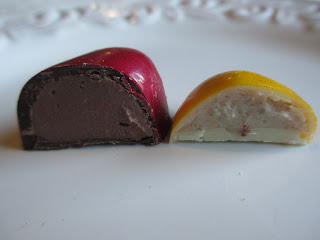 Strawberry Kiss - "Creamy milk chocolate infused with strawberry puree and creme de fraise." Apparently, this is one of their more popular flavors, and interest is well justified. Chocolate and strawberry are a classic but they're also done so often that they aren't always done well. In general, it's a forgiving pairing, but that doesn't mean that some pairings aren't much better than others--this pairing is much better than others. The heart is good-looking, nicely molded and painted in a great shade of red with a subtle sparkle to it. Enough to make it look elegant like a piece of jewelry. And the flavor is exactly what you want from a strawberry chocolate. Almost it doesn't taste like individual flavors because they all go together so well and because the flavor basically stays the same as the chocolate melts instead of changing or developing. The taste is strawberry, rich because of the creme liqueur and the chocolate. The effect is sweet and yet rich because of the quality of the milk chocolate. (I'm not certain, by the way, what kind of chocolate Xocolatl uses to make their truffles but it's good quality.) This is the best strawberry chocolate I've had. It's rich without being at all dark, in the sweeter range while still delivering a sophisticated type of flavor.

I'm impressed and excited. Xocolatl isn't too far out of the way of my usual routes around the Phoenix area, so I can probably stop by their shop when I'm in need of good, fresh chocolates. I know that I just chose the wrong flavor (for me) from the caramels, and two out of the three chocolates were pretty much perfect (the other was almost perfect). So thank you, thank you, this is exactly what I wanted to find somewhere in the state.
Posted by Deanna Skaggs at 7:16 PM