Little by little, I've been reading some non-fiction relating to Arizona in the last couple of years. Generally, I prefer firsthand accounts (Vanished Arizona by Martha Summerhayes was fantastic--you can read my post on her book here). But other books are good, too. I picked up Jan Cleere's Amazing Girls of Arizona: True Stories of Young Pioneers a little while ago. And while I didn't think I would be posting on it, I do have a couple of random comments. 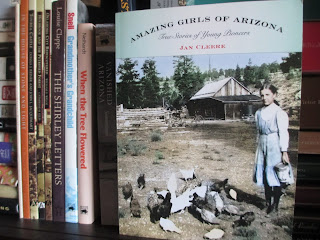 There are eleven chapters, generally around ten to fifteen pages each. Each one focuses on a particular story. Despite the implication of the title, the narratives follow the girls throughout their lives. Usually the chapters start by describing a scene when the person was a child and then everything is told more chronologically from there. Sometimes the area of focus is during the woman's childhood, but in general you get a sense of their whole lives--in brief. So in that regard, this book is similar to Julie McDonald's Unbreakable Dolls trilogy (more polished, though, since Julie McDonald's books were self-published and Jan Cleere's isn't).

Also because of the title, I was expecting entertaining, inspirational, awe-inspiring type of stories. But quite frankly, a lot of these were just sad. (I'm not saying that's a bad thing--these are true stories. I'm just saying it isn't quite what I felt the title implied.) What so many of these women went through was sad and not just because of natural circumstances (poverty, harsh weather, wild animals, backbreaking work, that sort of thing is what I mean) but because of people. Anna, who was very established and respect in her community until the KKK came in and got everyone to turn their backs on her. Dowawisnima (renamed Helen), who was forced away from her family (she was Hopi) to go to a harsh school that was basically intended to remove her culture from her (though she did take advantage of the education, the circumstances surrounding it are just wrong). Ruth, who was moved from California to a camp in the desert during WWII just because she was born Japanese. There are so many sad things about this country's history--and even in just this short look at a few women's lives (women who lived for at least a time in Arizona), you see so much of that sadness.

So I was thinking less about how resilient these people were and about how they were able to get good things even out of these circumstances and more about how I regret that they had to go through all of this to begin with.

There were other stories, too. Atancia, who was married just before she turned eleven, seemed to have a generally good life and to have married a good man (despite how, well, taken aback I was on hearing her age when she married). Even though Edith died rather young (most of these women had quite long lives), she really lived what we'd call a full life. And so on.

These eleven stories have covered so many different times and places and perspectives and circumstances for all being about Arizona around the pioneering era. It makes me realize just how varied the state's history is and how many different kinds of people have called this land home.
Posted by Deanna Skaggs at 5:57 PM