There was a time when I thought that I wanted to study history in college. And then I came to realize that my interest in history is in terms of the culture, way of life, and thoughts of people who have lived--which is primarily the focus of the study of literature. So that's how I came to choose literature instead of history.

Now that I've settled into the pace of being out of college (where you are made to read a great many books), I've started my scattered excitement over reading a variety of things that I choose and that I alone really want to read. I've started in on Star Wars and I've also been picking up a lot of Arizona books. And what interests me most in the latter field are the accounts (preferably firsthand) of people who have lived in this wonderful state. When I was at the Sharlot Hall Museum in Prescott last month (they have a pretty wide selection of books there, by the way), I was excited to find Vanished Arizona by Martha Summerhayes, which had kind of been on my list of books I should read for a while. 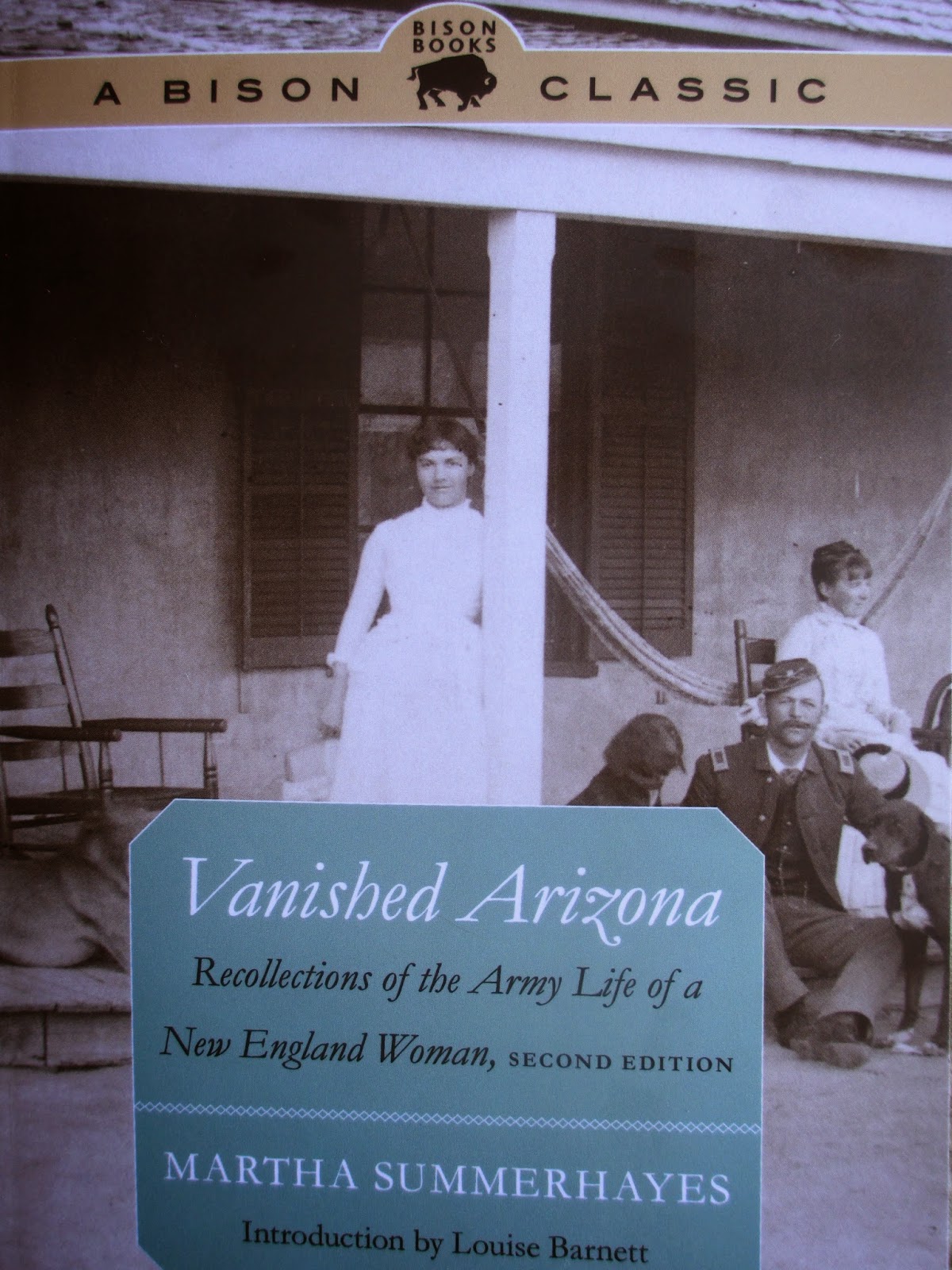 Martha Summerhayes was an army wife; her memoir was published in 1908 and covers her married life from 1874 on. From a station in Wyoming, her husband was soon sent to Arizona, where the two of them lived at a few different places over the years. There is also some account of their time in California, Nevada, New Mexico, and Texas, but mostly this book is about Arizona--in the 1870's.

And it is such a good book.

Martha gives such an honest account of her life, what she saw, and what she felt. She includes her own folly, too, often saying (especially towards the beginning) how she wasn't used to certain ways of doing things or was very ignorant about things that would have helped her. She doesn't exactly describe the family she came from, but it seems they were upper class. Coming from that, she becomes the wife of a second lieutenant (the higher the rank, the better the quarters and things like that--and second lieutenant wasn't quite the highest rank) in territories far from what she had known as civilization. So she talks about the intense heat, the cold, the lack of fresh food, the loss of luggage and personal items, the difficulty of travel over rough and barely trodden roads, and often just the loneliness of living so far from friends and family.

It's a good picture of what life was like for the families that accompanied the officers into the frontier. Despite all of the troubles, Martha mentions from time to time how this place that was so difficult to live in was taking a certain hold on her and how she was glad that she had gone with her husband instead of staying behind and letting him go it alone. And yet she also will bounce back from saying comments like this to moments where she did wish she had never come, giving descriptions of the complete horrendous nature of living in these places. (Of course, she uses her own language to say all this.) And that's one of the things that I found so real about her account. Sometimes you don't just love a place or hate a place: sometimes there is so much more to your relationship with a land or a place and with your life, too.

There are so many stories in here, about food, about travels, about the people she meets, about the customs that everyone had at the various posts. Some are funny, some are sad, some are quite frightening. If ever anyone had adventure, it was these people. Everything that happened to them was . . . big. And that's the note that she ends on. This book is called Vanished Arizona because she emphasizes how much Arizona changed even ten years later. I think a lot of the historical places around here, when they talk about "how things were" tend to focus on the 1880's--and so much was different just in the decade before that.

She mentions how the new ways didn't seem to suit the place and that she preferred it the way that it had been--even though, as you're reading, you know that the changes make it such an easier place to live in without all of the troubles that she had to go through before. And it makes me think about what it is to love a place like Arizona from a modern perspective--I have to give this more thought.

Final statement: read this book if you have even the slightest interest in any of it. It's wonderful.
Posted by Deanna Skaggs at 12:04 PM