I adore the Mission Inn in Riverside. And given its situation on the edge of LA and its surrounding bulk of outlying cities, it makes a perfect stop on the drive home from California back to Arizona. Stop at the hotel for a night, or for a browse through the Mission Galleria antique store across the street, or to get a box of Casey's Cupcakes to bring home (a bag of them is also an acceptable carry-on for the plane). 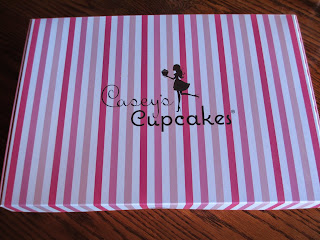 This box of six had two Cinnamon (the ones on the top left and right corners), two Peanut Butter (on the bottom corners), and their flavor of the month: Crownie. They also had a Mother's Day flavor, something with almond frosting and a layer of raspberry; it was very pretty, but not my flavor preferences. The Crownie has a Ghirardelli brownie on the bottom, plain cake for the rest, and a sprinkle of delicate, shiny glitter on the top of the frosting. That isn't the official description, but I wasn't thinking of reviewing it when I was in the shop, so I didn't make note of exactly how the saleswoman described it. 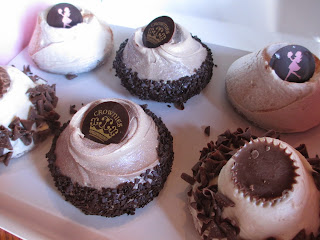 Yeah, I know, you can buy Ghirardelli brownie mix at Costco (I don't know if Casey's uses a mix, or buys the brownies from Ghirardelli already made, or makes them themselves with Ghirardelli ingredients), but it's brownie in a cupcake and it's very pretty. I've reviews Casey's cupcakes before, so I won't go into general details, just about the specifics of this flavor. The brownie makes up just the right proportion of the cupcake. It's maybe about a third of the depth, right there at the bottom, so it doesn't take away from the light cake texture that brownies need. It just adds a little more richness. 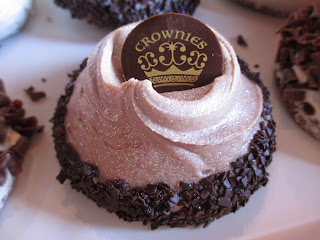 And look at that glitter. So pretty and tasteful, not overdone. I think it may be a milk chocolate type of frosting with its light brown shade. Sweet enough and not too buttery (I can make buttery frosting at home--I don't need to go anywhere to buy it). Instead of the usual chocolate with the pink Casey's silhouette, the Crownie has its own chocolate circle with a golden crown. Though some of the cupcakes have something different from the chocolates (like the peanut butter cup for the Peanut Butter cupcakes) on top, I think that's the first time I've seen the chocolate circles with a different image. 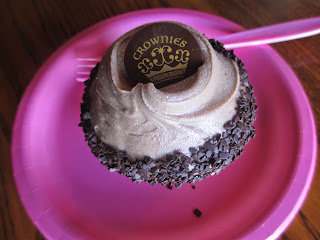 By the way, I also highly recommend the Cinnamon cupcakes. Along with Strawberry, they may be one of my favorite flavors. Ah, I love this tradition of cupcakes to bring home.
Posted by Deanna Skaggs at 12:44 PM