Though it officially came out today, I've had the digital version of Fireflight's new album, Innova, for a week now and I received my signed CD on Friday--as part of the pre-orders. So I've had a chance to listen to it a few times already. 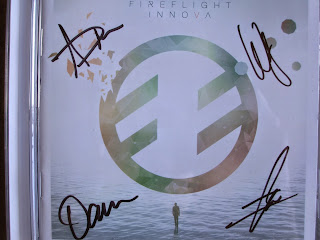 While some albums can take a moment to get used to and to understand the tone of so that you come to like them more with time, I think I've understood Innova right from the start. From the album title, you already know that it's supposed to be about renewal--and that's exactly how the songs are. They're a slightly different sound from Fireflight's previous music, a little more of that upbeat, danceable pop sound that's been going around lately and a little less on the heavier rock sound. And not only is it a sound that's been popular lately, but it also makes sense: they're songs about not having any baggage and being fueled by the positive light.

"Resuscitate" and "We Are Alive" were the first two singles from the album and they pretty much stand as emblems for all of it. I would particularly like "We Are Alive" to be a sort of anthem for this genre of music: it expresses exactly what the Christian life should not forget. There is light, there is life, and there is passion. Sure, there are moments of difficulty, but there should never be passivity or a lack of passion. Never forget that you are alive.

I also really like "Safety," which features Stephen Christian; I didn't realize he was the singer of Anberlin and of Anchor & Braille--I may have to look into his music because I really liked his voice in this song. The song's also more along the lines of Fireflight's earlier days (with a modern sense to it, though, I think); maybe that's why I like it.

I'm not going to go song by song and I really have nothing more to say about the sound (since I'm not a music person and don't really have the vocabulary to describe it). I'll just say that I'm enjoying this new album and you should all go buy it if you haven't already.
Posted by Deanna Skaggs at 4:46 PM