Has everyone else been having such weird weather? Usually by the end of May, the heat starts to get an edge to it--summer starts to settle in and it gets uncomfortable to be outdoors during the day. But the weather is still nice enough right now to have the door open even in the afternoon--and a couple days ago it was cold and it was raining and are you sure it's almost June?

So I need reminders that it's late spring, nearly summer. Limeade in the refrigerator, cantaloupe for breakfast, and afternoons spent sitting outside reading. Oh, yes, and how about some mango chocolate? I know, I'm not sure if that sounds good or not, either. It's a new flavor from Ghirardelli, Mango Sunset. And it's hard to know what to think of it. You see, I like Ghirardelli, as long as they don't veer away from what they're capable of doing, and what they're capable of doing is making simple chocolate bars, either plain or with very classic flavors (mint, caramel, etc.). Sometimes when they try to get creative, they just show what they're not capable of. And mango chocolate, well, that's not exactly traditional, is it? Hence my worry. 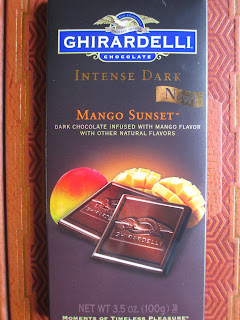 Tearing the seal on the foil wrapper reveals the smell of mango and chocolate together, not exactly something I found exciting. I usually eat mangos plain. And maybe mangos are close to citrus--and I generally don't like citrus chocolate. But what worried me more than the idea of the flavor combination was when I had my first taste and wondered if there was something artificial in there. All the ingredients list says is "natural flavors." And even the flavor description calls it "dark chocolate infused with mango flavor with other natural flavors." Huh. It would seem that mango isn't an easy flavor to get into chocolate without using lots of real mango, perhaps in pieces. But what are those other flavors? There's no mention of what they are--so they must not be included for their own sake; they must be there to try and enhance the mango flavor and its unity with the chocolate. But I just keep getting this weird flavor. 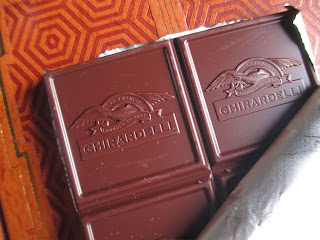 Is it the mango, unexpected in the middle of chocolate? I don't think that's it: the more I taste, the more I grow accepting of the idea of mango chocolate. It's freshness and brightness, orange and yellow, to stand against the deeper red of the chocolate; it works. It's just that other, unidentifiable flavor that tastes strange (I realize that this flavor may in fact be the mango, and if that's the case I would like to see a better representation of mango in chocolate). 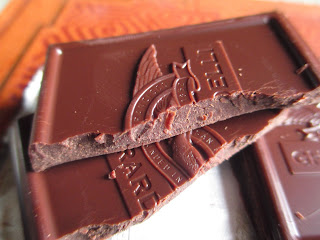 The chocolate itself is a light dark chocolate. I don't think it's a 75%; it's probably more like a 65% cocoa. Probably a good thing that it isn't too dark: this lighter persona better suits the mango.

So was I right to worry? Yes, probably right to worry. But was I correct in my worry? I'm still not sure. I think this chocolate comes across okay: I'll finish it. It's an interesting idea for a summer chocolate. But I suppose I won't buy it again; I'd rather have one of Ghirardelli's plain Twilight or Midnight bars. You decide if that's a failure or not.