Ooohhh, I didn't know what I was missing out on. Did you know? Did you know all the feels that are contained within the novelization of Return of the Jedi? I'd thought--I don't know. I mean, I enjoyed reading The Empire Strikes Back, but this was something different. This was, this was all the power of the film that's created so many Star Wars fans, all put into 230 pages. I can see why Barnes & Noble did one of their leather-bound editions of this trilogy--and not just for the cool cover. 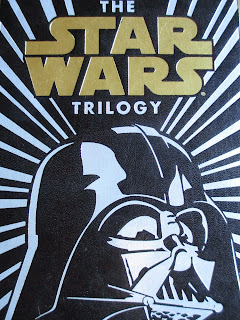 Star Wars is simply such a great story, built on so many archetypes and symbols and universal themes that it rises up to be something incredibly moving. And not only does this book portray what was in Return of the Jedi the film, it amplifies it. There are a few scenes not in the movie and a little extra dialogue that let you take a longer look at character development, as with The Empire Strikes Back. But there was also more symbolic power in this book. There is more emphasis on what the settings mean. You fully get a sense of what it means for Luke to return to Tatooine, and if you'd never pondered the meaning of Endor before you'll get it now. It isn't coincidental or random that it's Ewoks who help overthrow the Empire. And, oh, that scene when Leia is waking up on the Endor moon after she's knocked off of her speeder, it's just gorgeous. The imagery and the themes encapsulated in that one moment are flawless: that's what's wonderful about Star Wars. You can get battle scenes or sci-fi/fantasy settings anywhere, but it's the themes that make it special.

And the confrontation between Luke and Darth Vader, wow, it loses nothing from being translated from a visual medium to a flat page. I'm so sad for Anakin, the path he took when his life could have been so different--but then he does come through in the end and it isn't too late for him, but it is too late for his life. It's terrible, terribly tragic, and beautifully tragic. I didn't know this book would move me so. I'm incredibly glad I've begun this journey into Star Wars books. Next up: a break and then the prequel trilogy.