Okay, so I once again have a chocolate that I bought before I made my comment about what types of chocolate I want to try and stick to from now on.

In fact, I'm not entirely sure why I chose this chocolate from La Cure Gourmande. It's something I haven't tried before, which is enough. But I think also that I found the packaging pretty. The card box isn't just yellow: it's a darker, richer yellow at the bottom that fades to a brighter yellow at the top, and a white lace pattern starts at the bottom and also lightens as it reaches the top. The painted picture in the middle is a late Victorian scene, and the Victorian era is my favored historical setting. And since I'm not really reviewing Christmas chocolates this year, I suppose the frilliness of this packaging acted as a stand in for all the holiday glitz. 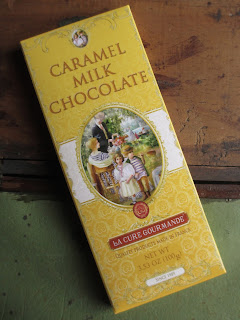 I was unprepared, however, for the beautiful way in which this yellow card box folds open. Remove the adhesive from one edge and pull to the side the back cover and you'll find a sort of envelope shape, with one edge made of gentle curves. More Victorian scenes. I hadn't been so delighted in opening up a card box in a while. 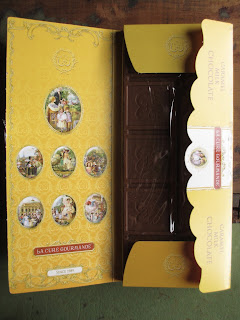 The chocolate bar is equally lovely. Light and smooth milk chocolate squares, ten of them, arrange themselves horizontally rather than vertically. That is, you have to hold the chocolate bar horizontally for the initials "CG" (for Cure Gourmande) to become clear. Victorian-style lettering makes for a more unique look than I would have imagined, and even the simple edging on the squares is the perfect detail. 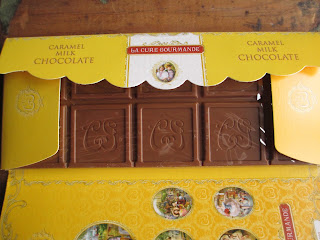 As far as flavor, I feel like this chocolate tastes exactly like (or very nearly exactly like) one I've had before--but I can't seem to remember which chocolate it reminds me of. It may have been a truffle. You'll have noticed that the name of this bar is Caramel Milk Chocolate. It isn't filled with caramel, no. Rather, there is caramelized sugar in here along with the other ingredients (as well as "spices"). You can almost imagine that it's just a very caramel-tasting chocolate since caramel is one of the basic flavor notes of milk chocolate (this one has 31% cocoa content, by the way). But this flavor is stronger and is less linked to the flavor of the chocolate. It's like you get all the flavor of a caramel filling without the separate texture. 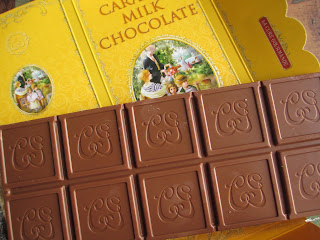