Just a couple of months before the announcement of this new novel, I was talking to someone about authors never finishing a series, like how The Host was supposed to be the first installment in a trilogy and eight years later doesn't even have one sequel. And then came the sudden announcement that Stephenie Meyer would be releasing the first in a new series--an adult thriller this time, The Chemist. Didn't we all kind of wonder what we were even supposed to think of that? 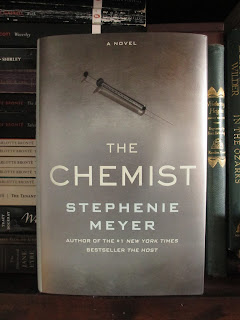 I guess I read a variety of types of books--I always think that I don't, but then I look at my shelves and I compare them to other people's and I realize that I do. But there are a couple of genres that I hardly touch. Mystery, romance, and thriller. I just don't read those genres. And the only book I can think of that I've read that was probably a thriller, Blink of an Eye by Ted Dekker, held my attention while I read it but failed to keep any good opinion of mine once I'd finished it. That's how suspense usually is for me: temporary. It doesn't hold more meaning for me, and I usually prefer my books to have at least some element of lingering meaning.

So I wasn't exactly excited that Stephenie Meyer was releasing a thriller. But she's one of the authors I've said I'll read anything she publishes (until I get disappointed by a book and change my mind, that is). I wasn't able to read the book right when it came out because I was reading other things first, which meant that I read it during Christmastime.

And that did rather bother me at first. During this time of year, I didn't want to be spending my time reading about being on the run, people shooting at each other, and various methods of torture. Add to that that I found the first thirty or so pages exceedingly boring: they're all about spy traps and gadgets and such. I worried that all 500-some pages would be like those first pages. Then I got to the torture stuff and I wondered why I was even reading this because it just really didn't seem like my type of book.

But somewhere at about that point, I started reading Stephenie Meyer again. A couple of characters reminded me of Ian and Kyle from The Host. And I saw in the elements of hiding and preparation pieces from both The Host and Twilight. Then the book started moving in toward the human element that is prevalent in all of Stephenie Meyer's work.

In the midst of all of the "action stuff" (which is the easiest way of putting it without writing out the plot), the characters became people. People with personal struggles and doubts and choices and individuality. That's what allowed the plot to move forward with some interest for me, and that's what kept it from being too much of a generic action story.

There isn't much else for me to say. I guess I did overall enjoy this book, although I didn't overly enjoy it, either. It still isn't really my genre, so I'm sure people who read more of this sort of thing will like it more than I did. It also says something, though, that I could enjoy a book that wasn't a type of genre I usually enjoy. So despite my lukewarm and brief comments, I do find that a success. (I also don't know how to talk about individual aspects of this book without simply giving away the whole plot, which is also why my comments are brief.)