For some reason I can't quite explain, I find that I have been avoiding TCHO Chocolate. It has been so long since I've had any of their products that I can't even remember which ones I have tried. Wondering if perhaps I hadn't favored their plain chocolate (although this is simply a guess because I have no memory anymore of what TCHO's chocolate tasted like), I decided to experiment by getting a flavored chocolate instead of a plain one. After all, every company has its strengths, and some are better at either plain or flavored chocolate. So let's start afresh with TCHO with their Toffee + Sea Salt bar. 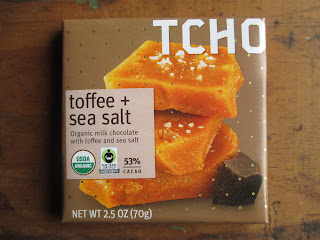 I am growing increasingly aware that I need to be buying organic and fair trade (not "Fair Trade," just something with that concept--certain of the gourmet chocolatiers, for instance, don't necessarily work within the Fair Trade system but they do work with the cocoa farmers all the same) products. Coffee, tea, and chocolate are three products that stand out. I used to say that I would mainly buy fair trade chocolate except when I wanted to try a new product so I could review it. I'm still going to do it; I can't say that I won't because I know that isn't true. But I am growing increasingly guilty about buying mass-produced chocolate that I know isn't made with what we would call ethical cocoa. You vote with your dollar and you help change the world with those votes, after all. So. You might see something of a change in the type of chocolate I'm willing to review now.

I take the time to say all of this at this moment because I see that TCHO is in fact organic and fair trade--they're also a bean to bar U.S. company, which is nice. So I should in fact be paying more attention to TCHO (World Market keeps a nice supply of their bars right now). 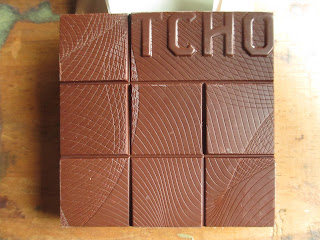 The paper wrapper is casual in its style, though also modern and trendy with a enough of a touch of elegance to hint at quality. It has been so long since I've seen a TCHO chocolate that I'm taken anew with the design of the bar. That geometric pattern has so many lines and so many details; even the small squares are set at angles rather than keeping the usual flat, level surface. This look is what I've been calling quality that's approachable.

Once you break a piece of the chocolate, you can see the small toffee crystals; they're mostly clear but with a slight shade of yellow. Now, I am fond of toffee, but these small pieces are still a nice change from the big, thick toffee that gets stuck in your teeth.

The first taste I had was of the sea salt, which is crisp and sharp in flavor. The chocolate comes in next, followed soon by the sweet and salty toffee. Each element has its moment, and each moment blends well with the others. I was slightly worried about the cocoa content of the chocolate: sometimes chocolate in the 50's range is bland and stuck in the middle of two concepts, sweet and dark. This chocolate is neither exactly sweet nor dark and yet it isn't bland: it's more solid in flavor than anything else, and its taste does have warmth. It makes for just the right companion to the toffee and salt.

It's quite a good bar of chocolate. And the more casual nature of the toffee means that you can use this one as a replacement for chocolate candy bars. Sure, it costs more than a candy bar, but there are nine squares (or three rows) in one of these bars, so it in fact works out to be a good value. Now that December is upon us, this would be a great addition to Christmas stockings, too.
Posted by Deanna Skaggs at 4:00 PM