The Catalyst for Rogue One

I've been trying not to think too much about Rogue One because I don't to spend all that time wishing it were out already and because I simply want to enjoy it for what it is when it comes out versus forming all these expectations in my mind beforehand. Still, the release of the movie's prequel novel, Catalyst: A Rogue One Novel by James Luceno, was pretty exciting.

And it's ever so much more of a catalyst for the film than the main lead-in book, Aftermath, was for The Force Awakens last year. Whereas Aftermath was setting up its own book trilogy and not necessarily setting up the movie, Catalyst really is setting up for Rogue One. It's basically all about the Death Star, and of course we all know that Rogue One will be about the team that stole the plans for the Death Star from the Empire. 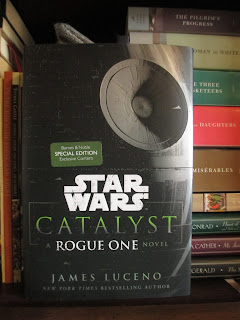 Mainly the book focuses on Galen Erso, who is the father of the film's main character, Jyn, and also a highly intelligent scientist. There is quite a bit of technical speak in this book, but it didn't really bore me--it somehow fascinated me instead. It isn't just science; it's also about the Force, and about where the two intersect. And in with all the technical speak and company politics (if that's the right phrase) are questions of scientific ethics and personal morals. What makes something good? And if something is better than something else, is it really bad? All very interesting to read, and all very Star Wars.

From the Star Wars books I've read so far, I thought that I preferred the more dramatic books. This one seems less dramatic, and yet I really enjoyed it; it's kind of a slower read, but I didn't mind that. And I think the reason that it still appealed to me was that everything was in fact grounded in individual characters and human nature and all of that side of things. James Luceno also penned every passage so well that instead of just looking at plot, I was also noticing the way this story was written--which is a treat for what you might be able to call genre fiction.

The way this book is physically composed was also, well, rather awesome. The chapters have names, which I'm not used to anymore--that helped to spur on my excitement for each next phase of the book (because, of course, we all know going in what the basic story will be, so it isn't simply a question of what will happen, as it is with other books). And in the page before each chapter starts, there is a close-up of, presumably, the Death Star plans themselves. Grey lines on a white background that at first just look like a pattern--until you realize what they are and the awareness becomes almost chilling.

One more week until Rogue One, and this book has indeed whet my appetite for the film.

Posted by Deanna Skaggs at 4:34 PM