You know how locals usually don't find themselves in the tourist areas very often? That's how it is for me and Old Town Scottsdale. There are a couple of shops there that I like, but I don't have the need to visit them too often. I used to love eating at Distrito at The Saguaro Hotel--they had some of my favorite food but regrettably it was always empty there, so they closed last year (there is now a new restaurant at the hotel, but it isn't at all the same).

So when a couple of us found ourselves headed to Old Town Scottsdale looking for somewhere to have dinner, we had no idea where to go, despite knowing the names of several restaurants there. You see restaurants while driving by but you don't necessarily ever go to any of them. By chance, we ended up walking down Main St. and we saw a sign for Nonna Urban Eatery. The name sounded promising, so we went to look at their menu, which also looked promising. 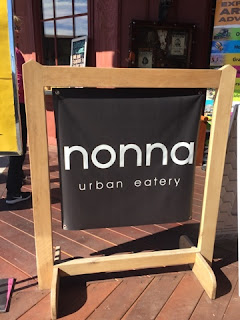 This is the sign that led us toward the restaurant, but I took this picture another time (during the day).

On learning that this is a new restaurant (they hadn't yet had their official opening when we were there this past weekend), I felt similar to how I did visiting Moscato in Camp Verde back when they first opened. There's something special about being there to see the beginning of a promising restaurant.

But it's Scottsdale, you say? Surely there must be plenty of good restaurants. Yes, there are. But there are also plenty that I don't care for and many that I'll eat at but won't get excited about. I like restaurants that serve food, and sadly that can be hard to find. Sometimes these days the restaurants with more natural foods also have a "healthy style" and I don't want kale wraps or sweet potato fries.

Nonna is more hip and adult, less trendy-rustic. They have a selection of wines and such and their plates are small, giving, well, the urban feel. This is a place where you can go to spend time and a place where you will enjoy every aspect of your food. 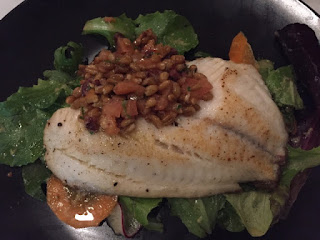 Iced tea, tilapia, and a taste of both the chocolate cake and tiramisu. These are all simple dishes, foods that I've had before. But in this restaurant they were all unique and all full of flavor. Chef Gian Franco Brugaletta, according to the restaurant's website, seeks "to bring back simple, nutritious food, through traditional and creative flavors." This is exactly what excites me in food, and this is why I immediately felt at home in this restaurant. I don't need dishes that I have to Google or dishes that required advanced chemistry to make. Just give me food made with good ingredients that you have formed in a way to make the flavors dance. 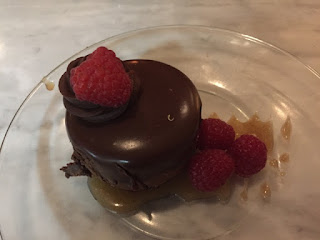 That's exactly how the tilapia was. Tilapia is a light fish, so it already tastes nice even if you don't do much with it (I've made it with very bare seasonings when I've made it at home). But here the seasoning added so much flavor and together with the side accompaniments, this was a unique dish that I wouldn't have been able to put together myself and that I wouldn't come across in a restaurant the next street over. There is art in this kind of simplicity, where "simple" doesn't mean boring or lacking in detail. As usual, this isn't a review. It's a reflection on how satisfying it is to find a restaurant that does so well with its food. This is food that I would (and do) look forward to returning to. Given that they use seasonal ingredients, there will probably always be something different to try. Just note that they currently close for Sundays and Mondays. Go there during the week or on a Saturday for fresh food and a stylish atmosphere.
Posted by Deanna Skaggs at 3:47 PM