You know what? I think that it was the name of Seed and Bean that led me to look past their chocolate before. World Market's been carrying their products for I think at least the last year (while they keep certain brands in stock, usually the ones that they rotate in and out stay for about a year). "Seed and Bean" perhaps implied to me that this was a "healthy" bar filled with sunflower seeds and pepitas and maybe flax and chia or something strange like that. Such, however, is not the case. I suppose, then, that the name must simply come from the fact that we call cocoa beans beans when they are in fact seeds. 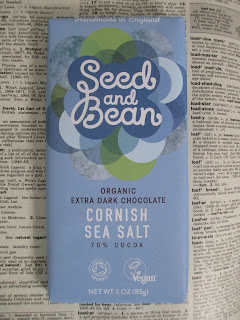 And using "seed" in the name does give more of an organic sound to the name, which I'm sure is intentional. Seed and Bean is organic chocolate, and it carries the stamp of The Ethical Company Organization, which I had never heard of before. The inside of the paper wrapper further explains that they are the only UK chocolate company to receive 100% ethical accreditation from them. This means, they say, organic ingredients, fair deals to farmers, and respect of the rural environments. That all sounds wonderful.

The bar that I chose is their Cornish Sea Salt, which is a dark chocolate with 70% cocoa content. The cocoa is sourced from Ecuador, and the salt is smoked Cornish sea salt. 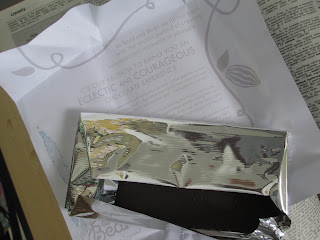 The simple packaging gives a handmade yet polished and up to date look. The "foil" wrapper is in fact cellulose, which the wrapper informs me is home compostable. This is a nice touch. Not only is it nice to have a material other than foil (foil is pretty horrendous, environmentally speaking), it's nice that you can compost this wrapper at home (not that I can personally have a home compost right now). Something that I bought recently made a big deal about having compostable packaging and then mentioned in fine print that it wasn't home compostable--tell me, where would you take such a thing for composting and who would go through that trouble just for one wrapper? Anyways, this cellulose foil is a little more like film, so it is true that you might go through more trouble trying to rewrap the rest of the chocolate--or you can just finish it all at once.

Unfortunately, World Market (where I bought this bar) often sells chocolate with bloom. I don't know if it's because they keep old chocolate or because they don't always keep it at the right temperatures or simply because they sell chocolate that has been shipped from far away. The fact is, you really can't see how pretty this chocolate bar must have been when it was first made because it now has that unfortunately layer of bloom on its surface. But at least you can still see the nice cocoa vine that runs across the twelve squares. Reminiscent of some of the chocolate I've found at Trader Joe's, the aroma is fairly standard and simple with a sort of marshmallow hint to it.

At first taste, the chocolate is a little bitter. Here I must note that this bar's best by date is already in August, which must mean that it's almost getting old--at least, the chocolate feels like it's getting old. It really isn't melting very well, and I've had to chew it a bit to get it to start melting, which unfortunately affects both texture and taste. Still, I have positive comments.

That slight bitterness quickly fades and then the salt comes in. It's just the right touch of salt, and it's good quality salt, and it's spread all throughout your flavor experience. So you don't just taste it once all in one go: it appears and then fades and then returns. As such, you don't really get a good chance to taste just the chocolate on its own; what you can taste of it, though, is perfectly fine. It's rich and warm. But this is flavored chocolate, so the salt is constantly working as the flavor companion. And, in fact, this is probably one of the better salted chocolates I've had. It's such a popular combination these days and yet it's one that you need to execute in perfect balance. And of course, if your ingredients aren't good quality, that'll come across. So I commend Seed and Bean for getting the balance and quality right.

For ethics and flavor, Seed and Bean is going on my decreasing list of chocolate companies I'm allowing myself to focus on.
Posted by Deanna Skaggs at 12:44 PM