I'm going to transition out of the two-in-a-row salted chocolates with a salted toffee chocolate this week. It's Theo's 55% Dark Chocolate Salted Toffee. As you probably know, Theo uses organic and fair trade ingredients, making them acceptable under my new (or maybe I should say "more fully self-enforced") standards. I also generally enjoy Theo's chocolate, milk and dark and flavored and plain. 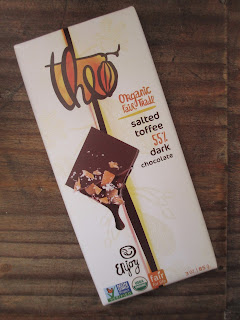 It's harder to say whether the "toffee" is the same thing as the "brittle," though they do appear the same to me. They both have that light sugar crystal crunch that I compared last time to rock candy. It's a nice crunch, and without the hazelnuts in this bar you're able to focus more on these little pieces of sugar crystals. There is some taste here and there of salt, in some places more than in others. The salt is definitely more of a companion piece or an accent, as the name implies; the emphasis there is on the toffee rather than on the salt. 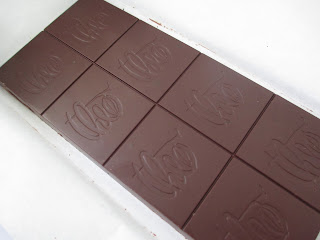 As with the Nutcracker Brittle, this is a bar that you have to chew on because of those little pieces of toffee in there. I think that, as far as the chocolate goes, I prefer the 70% to the 55%, but it's still basically the same chocolate, just . . . a little more watered down, if I may. It's hard to say that it's sweeter because it isn't really that sweet and it's hard to say that it's not as dark because the 70% isn't really that dark. It's just lighter; let's go with that description. If I might point out here, as well, Theo has set up a 55% dark chocolate that I'm neutral toward, instead of my usual negativity toward with cocoa percentage. This chocolate has a sort of rich flavor to it and a smooth mellowness that is unlike that thick, almost syrupy taste that's normal in the 50's range. I let a corner that had very little toffee in it melt in my mouth just so that I could test the chocolate's taste on its own, and it was able to stand on its own.

Given this lower cocoa content and the candy-bar-like inclusion of sugar crystals, Theo could make a miniature version of this bar if they wanted to try a different marketing angle. Even like this, it's something nice to reach for when you want a munching chocolate, when you're maybe craving something slightly sweet but not too much. Something to keep in your desk, maybe?

Posted by Deanna Skaggs at 6:22 PM