Yesterday, Sylvia went to visit the dinosaurs at Pangaea: Land of the Dinosaurs. One dinosaur meets more dinosaurs--which means there are at least two kinds of dinosaurs still alive. Dragon dinosaurs and this kind of dinosaurs: 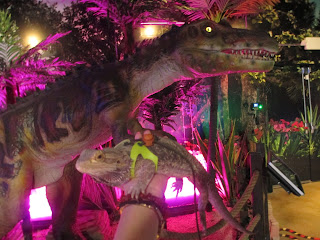 Sylvia chose to have her photo taken with one of the Irritators. They claw at the air like they're playing the piano. This one kept on raising its head to try and intimidate us; I had to wait until he leaned down enough that he would be closer to Sylvia.

I think she quite fits in with the other reptiles there. Except that her eyes don't glow so fiercely--and she certainly doesn't claw at the air as frighteningly or musically as the Irritators do. She is more tame and sedentary than they are.

Bearded dragons love Pangaea.
Posted by Deanna Skaggs at 6:14 AM