The Barber of Seville

What a grand old time of randomness Arizona Opera's production of The Barber of Seville was last weekend. There I was thinking oh, maybe Rossini's style isn't my favorite (I find I like Puccini's style more) and maybe I like the dramas more than the comedies (the dramas are all about violence and sadness and so they are very exciting). But this was much fun and in many ways fell in a completely different vein from Rossini's Cinderella last year. 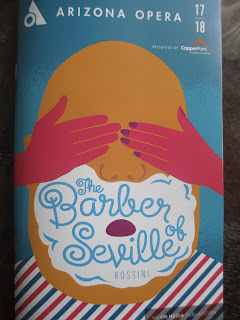 I've read The Barber of Seville, of course, and we're all familiar with a bit of the music of this opera ("Figaro, Figaro, Figaro," sound familiar to you?); maybe that also helped. And it was kind of one of those shows where you didn't even need to be following along with every plot point or understanding all the intricacies of what's going on with the music, etc. to just have a grand time watching.

Even with a fairly large setting like Symphony Hall, this production had the performers coaxing the audience to spur them on. I hadn't realized that the aforementioned "Figaro" tune is sung by Figaro himself (he's basically singing about how he's awesome, so it's quite funny to have those lyrics along with that tune). So Joo Won Kang basically came on the stage and said, oh, don't you love me, audience? And everyone did. Things like that.

In general, too, there was this sense sometimes of, I don't know what I'm watching but it isn't what people think of as being the opera, is it? I thought I didn't like comedies as much, but this comedy of randomness definitely caught me up. And this time I liked Rossini's music with the lyrics and plot; I didn't feel that disconnect between the two that I felt with Cinderella. This time I felt like the grand and bouncy (is bouncy the right word?) feeling of the music went well with the randomness of the plot.

I did regret right away when glancing at the program that I came on a night when Katrina Galka and Anthony Ciaramitaro weren't there; they're beginning to feel like old friends after seeing them at Aria Jukebox and at different productions. And they must have been great as Rosina and Count Almaviva. (Not to say anything against Stephanie Lauricello and David Margulis, though, of course.) I did get to see Zachary Owen as Don Basilio, Jarrett Porter as Fiorello, and Stephanie Sanchez as Berta, though, so there were still familiar faces (or voices?).

Alright, then, another famous opera tackled. Have you ever watched The Barber of Seville live? I tell you, opera is a pretty awesome form of art entertainment.
Posted by Deanna Skaggs at 6:18 PM