At long last, I have arrived at another of our local bean to bar chocolate makers. NutWhats is based out of Chandler, which is on sort of the northeastern side of the greater Phoenix area for those of you out-of-staters. One reason why it took me so long to get to this company was that I initially had the impression that they just made candy. Their name sounds like a candy maker rather than a chocolate maker, and their website just talks about their candy, as well. But if you visit their table at the farmer's market or any other event, you will find plenty about their chocolate bars, as well. 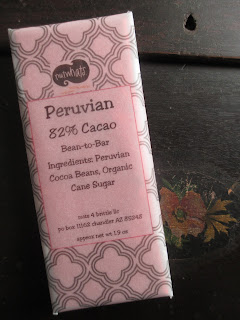 How does one choose two chocolate bars to look at from a full line? Randomly, of course, how else? Otherwise I just keep getting Madagascar bars from everyone--and while Madagascar-sourced cocoa is quite nice, also it is nice to regularly try other types of chocolate as well, right? 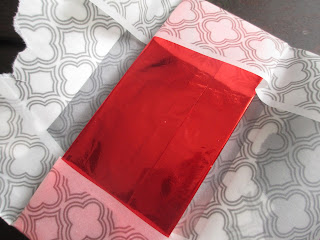 So we're starting off with the Peruvian 82% Cacao bar. The back of the wrapping tells me that this cocoa is both organic and fairly traded, so thumbs up there. Speaking of that wrapping, it has quite a singular look, doesn't it? The outer wrapper is like an extra thick piece of tracing paper with that bold pattern on it; underneath, the foil is just as bold in a bright red color instead of the more traditional shades of gold or silver. In a world of sleek and couture-looking chocolate wrappings, something like this definitely brings in a memorable edge. 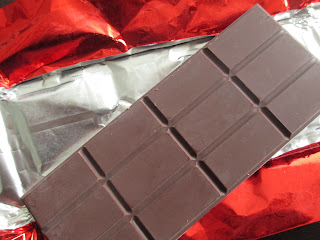 After everything that was going on with the outside, the bar itself is plain in its look. Its aroma comes with a bitter twinge. Initially, however, it tastes sweet and falls smooth on the tongue. The twinge bitterness does return as a flavor for a moment before fading away into that sweeter side again. I found the flavors not quite fruity or earthy, possibly something like banana. (The tasting notes do list banana, strawberry, and mango.) It's surprisingly mild for an 82%; you don't even get any of that bitter twinge once you come around to the second piece. Granted, there aren't too many flavor notes here; mainly this is a nice solid chocolate sense. And that's what some people like best.

Sometimes I hesitate to approach chocolate bars like this from a company that mainly markets candy. Candy is one thing and chocolate is another, so only so many people can do both well at the same time. Usually the chocolate ends up being mediocre. This Peruvian bar, however, delivers a nice classic chocolate vibe.
Posted by Deanna Skaggs at 6:29 AM