This week I'll be doing something a little different. I have three of these cute little bars from Chocolate Organiko, so I'm just going to give three quick and consecutive reviews of each one rather than either stuffing them into one review or drawing them out into three weeks. 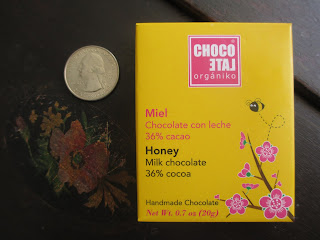 Small things are always cute and, like I've mentioned before, I think we could use more chocolate in smaller sizes like this. That is, usually when I think of a small chocolate bar, I think of 40 to 50 grams, but these are 20 grams--tiny, tiny. Irresistibly tiny. And they're from Spain, which is definitely less common to come across. Probably I've only had chocolate from maybe two companies in Spain during my ten years of reviewing chocolate (I just realized that this summer officially makes it ten years--why didn't I have a celebration?). The chocolate is labeled as handmade, which I take to mean it's probably made in small batches. It's also, if you hadn't caught on already, organic. Chocolate Organiko simply means organic chocolate; who says you need to get creative about what you name a company? 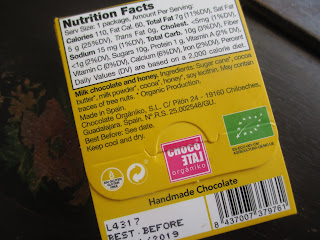 Our first of the three bars is the Miel Chocolate con Leche, or Honey Milk Chocolate. Now, you will want to note that this isn't chocolate sweetened with honey: there is still sugar in here. Honey is just acting as an additional flavor rather than as the sweetener. 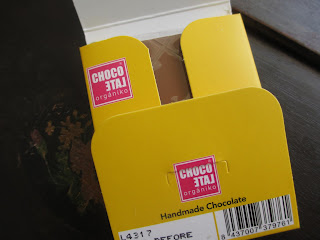 Even though the bar is so small that its box doesn't necessarily need a fancy way to open and close, the card box still comes with a cute fold out style (I will continue to use the word cute to describe this chocolate because small things are always cute). And there is also plenty of design to the bar itself even though it is so small; the tilted angle of the squares gives a fun and slightly quirky style. 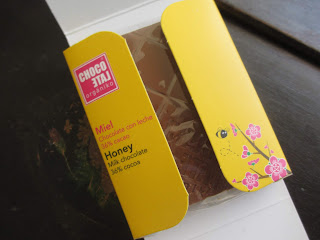 The chocolate's aroma is the usual sort of creamy, cocoa butter kind that comes with milk chocolate. The mouthfeel, though, is nice and cool, so not quite as melty and greasy as some. Flavor-wise, there are some nutty notes to the chocolate, along of course with the usual touch of vanilla. I want to say that I don't taste the honey but then I seem to imagine it coaxing its way in, especially towards the second half; it brings in perhaps a hint of richness with that golden sweetness that honey has. In the aftertaste, too, I think I sense the honey. 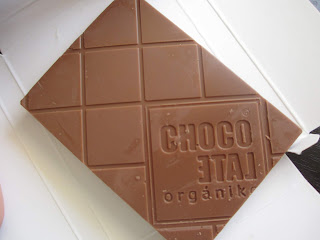 So definitely nothing like the honey chocolate from Untamed Confections, where honey is the sole sweetener and a major player in the chocolate. Yet still a pleasant chocolate. Definitely this is a light milk chocolate (which is, I suppose, the usual thing), more leaning on creaminess and sweetness and all. The perfect thing for a casual summer afternoon.
Posted by Deanna Skaggs at 5:03 PM