Continuing with the trio from Chocolate Organiko, today we have the Masala Milk Chocolate. The red color this time means boldness and spices; the quick description in the back lists cinnamon, cardamom, and vanilla. Interesting that vanilla is listed there, even though vanilla is a usual element of milk chocolate. I had been expecting more spices than just cinnamon and cardamom, something more like the strong blends I've come across in chai milk chocolates. 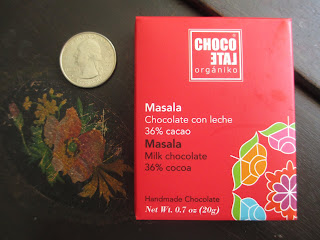 And there isn't any aroma of spices to the chocolate, either. Even though we still have 36% cocoa content milk chocolate here (which is presumably the same base as they used for the Honey Milk Chocolate last time), this time I'm getting a strong Hershey's scent that I didn't get before (and that I still don't when I go back to the Honey bar). Weird and not encouraging. 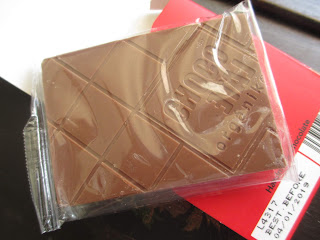 However, one must continue on. And even though scent is one of the first steps in tasting chocolate, it isn't always a direct indicator of how the chocolate will taste. It takes half a beat, but you then get solid cinnamon flavor with the chocolate. I don't know about the rest of you, but cinnamon and chocolate, to me, are buddies just as much as hazelnut and chocolate are. So this is already a winning combination. It may be that I am not advanced enough to taste the cardamom or maybe it does blend with the cinnamon, but I can't specifically identify cardamom. I would imagine, though, that it's what helps give the cinnamon strength and edge. It tastes great, with a nice and fresh cinnamon flavor. It's like hot chocolate in a chocolate bar.

The chocolate seems to taste similar to before, sweet and creamy. But with the addition of cinnamon (which is strong enough to be in the foreground but not so strong that it becomes spicy), this chocolate becomes my favorite thing in the world in the moment when I am eating it. Again, I had been expecting more of a complicated mix of spices, but this is pretty simple--and I find that I love it exactly for its simplicity. Simply delicious, provided of course you like milk chocolate and cinnamon.
Posted by Deanna Skaggs at 8:44 PM