And now we have the last piece in the trio from Chocolate Organiko. We're making the jump here from milk chocolate to dark chocolate, though just to an average cocoa content of 70%. Another lightly flavored chocolate here, this time flavored with salt from Ibiza, which is an island off of the coast of Spain. So the packaging is blue like the sea. 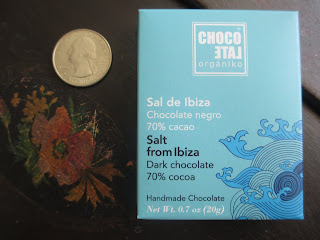 Unwrapping the chocolate, you can see some salt on the back of the bar but the front is clear. The surface is a standard color and the aroma comes in with some definite bitterness, more than I'd expected for a 70%. At first, the flavor, too, is on the darker side for 70%; it's lightly bitter with something of a dusty flavor (not texture). A little of the floral flavor notes, too, perhaps. The bitterness, though, is the kind that fades by the second bite. Turns out that the chocolate isn't so much to handle as at first I'd thought it might be--as far as darkness goes. 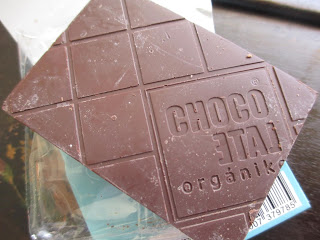 The salt seems only to be present in those places that are visible from the back, so this is one of the lighter salted chocolates. I tend to prefer a tad more salt--not super salty, just a little more than this. When I do taste the salt, it's good salt, strong and clear. It goes well with the depth of the chocolate; when I get one of the bigger pieces of salt or a corner that has a higher concentration of it, the balance is just right between the two. There are, however, some bites that barely have any salt at all. Maybe since this is such a small bar and most people are going to finish it in a smaller number of bites that I am, all of this is less of an issue. I would appreciate just a touch more salt, though, and spread around just a bit more. 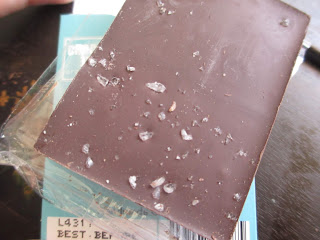 Easily I preferred both milk chocolate bars to this one; I just found it a little less balanced and a little less inviting. But that isn't to say that this one wasn't any good. When it came with the right balance, the salt brought just the right zing to the simple darkness of the chocolate.
Posted by Deanna Skaggs at 8:28 PM