Solo Is Most Wanted

Hmm. Once again, I'm praising a Solo book over Solo the film. I mean, I liked Last Shot possibly more than the movie and I definitely like Rae Carson's Most Wanted more than either the movie or the other book. In fact, I feel like this story might even have gone better as the topic for the movie than the actual movie's plot. 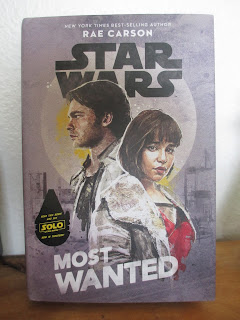 When I talked about Solo, I mentioned appreciating that quick view of Corellia that we got, that little glimpse that let us see people living under the Empire and under everything that happened under the Empire. Specifically, too, young people growing up under those conditions. Most Wanted takes place at a sort of undefined amount of time before the movie--before Han and Qi'ra became friends.

So we're seeing these two characters as barely more than children, just two young people trying to make it in the world by being part of this gang just to have barely enough to life off of. And in seeing characters in their worst setting, you see the best of their characters. You see Han's ingenuity and quick-thinking and you see Qi'ra's steadiness and bright mind. I didn't like Qi'ra in the movie, but I liked her in this book. In the movie, we mainly see her as essentially a kept woman, someone who's given up her freedom in order to have a position; that's sad but also not exactly the type of character I'm interested in watching. In here, you see her before all that. You see her as a person tired of living in dirt all her life, a person obviously capable of so much more but incapable of getting there; it's easier to be happy about her successes in this setting.

And, well, this story kind of makes more sense than the movie did. The movie had all of these random, forced moments. This story mainly just flows, while still addressing certain things--like giving a reason for Han to avoid "causes." Or maybe I just liked this book because the characters did lots of walking (and running) and there were lots of descriptions of places and of food (or the lack of it). Nice and straightforward and real world.
Posted by Deanna Skaggs at 6:13 PM