There were two more chocolates that I came away with from the gift shop at the Phoenix Zoo; both are from Chocolate and Love. This is a Swiss company and the chocolate is both organic and fair trade. I'm not used to seeing so much fair trade chocolate in a gift shop, so that was why I got so excited to get a few of them. Their gift shop, though, does have a generally pretty good selection of items--I even remember that from when I visited before years ago. This colorful wrapper with a pattern of vines and leaves fit right in. 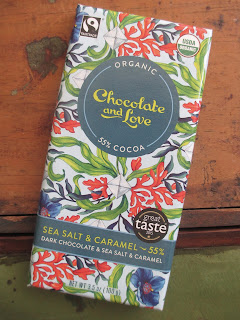 The wrapper is the kind that folds out to have more info about the company and its practices on the inside; this is always a nice way to keep the mess off of the visible packaging but still give the consumer information. (The chocolate, by the way, is sourced from Peru and The Dominican Republic.) I don't, however, favor the white wrappers, just because they don't make resealing as easy (if, of course, you're going to eat all of the chocolate at once, then this is irrelevant). The squares are in a simple style, decorated just with a series of lines going across. 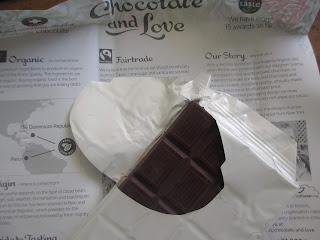 Given that the cocoa content is 55%, it follows that the aroma is of sweet dark chocolate, like semisweet chocolate chips. And on beginning in, I discovered that once more we have the crunchy caramel. I just don't get why everyone is calling this caramel instead of just going for toffee; does the word caramel sound more appealing to consumers than toffee? Possibly: it sounds more like modern candy than old-fashioned sweets, I guess. 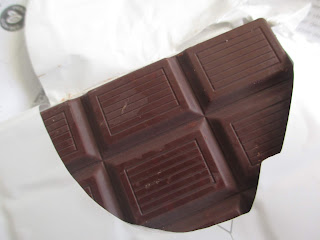 Now, one of the bits of info that's on the inside of the wrapper instructs you to let the chocolate melt rather than chewing it. Sure, of course you generally want to do that for dark chocolate--but especially for plain chocolate. If you do that here, you'll only taste the chocolate and then be left with all the crunchy caramel at the end to taste all on its own. So you do have to crunch. After all, this caramel seems almost harder than toffee.

While the salt is added in a generous amount (I've had stronger, but this definitely isn't on the light side), the effect is more like salted chocolate than salted caramel. The chocolate is close to what I describe as that Nesquik flavor. It's sweet, which makes it more of a confection than just dark chocolate. But, you know, I guess it makes sense for this chocolate to be on the sweet side given that the Swiss are known for milk chocolate. And for such a hard caramel as this one, you need a heavier carrier than milk chocolate--so this type of sweet chocolate allows you to keep the sweetness while still having the strength to carry the caramel.

It isn't bad. It's mainly a nice crunchy caramel chocolate. It's just that the caramel is so hard that sometimes it reminds me of eating rocks. Granted, it doesn't get stuck in your teeth the way that toffee does, so that's a benefit. It still hasn't won me over to the whole crunchy caramel concept; however, this bar does make for a nice crunching confection type of chocolate and I suppose that's enough.
Posted by Deanna Skaggs at 12:21 PM