Ashley Eckstein, voice of Ahsoka Tano and founder of Her Universe, the company that started all of the great Star Wars, Doctor Who, Marvel, etc. clothing for women. Now she has a book out about her journey towards achievement. As you can tell from the title, though, It's Your Universe: You Have the Power to Make It Happen isn't exactly an autobiography. Ashley is writing directly to her audience and letting them know how they, too, can make their dreams reality. 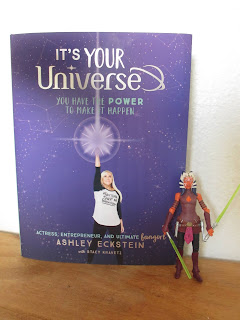 It's a YA book, so it's short and succinct and styled in that casual way that reminds me of a magazine. There are sections of blank lines scattered throughout where Ashley encourages her reader to make lists or otherwise write things down that will help with planning out a dream. Lots of pictures, too. A few of Ashley, maybe at different stages in her life that she's talking about--like her early trips to Disney World or the first time she put on a Her Universe fashion show at SDCC. Plenty of the images are illustrations with Disney imagery.

The style of the book ties in Disney stories with life lessons. And sure, much of this content is, well, nothing that you'd call new exactly. It's all great advice that I've mainly heard before. However, it remains wonderful advice to have collected here and put out in such a straightforward and honest way. Sometimes just because you know that, oh, you have to work hard and not give up and come up with multiple plans to achieve something, etc. doesn't mean that you don't need a reminder of all that. Sometimes you need to hear again that even though you feel like you just lost a big opportunity, the reason you lost that opportunity might be because there is an even better one coming up.

And also this book was a reminder that just because I know certain things doesn't mean that everyone else does, too. Especially here is where it helps that, even though any age can read this book, the target audience is mainly pre-teen and teen girls. Reading this was a reminder that there are still people figuring things out, making realizations about the world and about themselves and their place in the world, people still trying to plan out what their contribution will be. It's a reminder that for every good thing you figure out for yourself, you need to share that with other people, too. If you've achieved something, help other people achieve something, too (which doesn't just mean achieving a dream like starting a company or something; it can simply be achieving contentment in life or the ability to smile daily). And that's exactly what Ashley does with this book.

I knew only a little bit about Ashley's story and though she doesn't go into great detail here (probably partly because it's all recent history and partly because she doesn't want the focus to just be about her), there were still plenty of interesting stories to hear, from her early acting work to her job at Disney World as a teenager to the casting call that led to Ahsoka. In hearing her talk about starting up Her Universe, I realized that I had kind of forgotten just how much Her Universe changed things. It was years ago now that I found that Darth Vader dress from them that I just thought was the most awesome thing--and now dresses like that are so common that I've almost forgotten what it was like before they existed. The shirts and the accessories, too. So much variety. It's funny: if you watch Fresh Baked shopping at Disneyland, David sometimes talks about how there is such better Star Wars clothing for women than for men. Ashley started that. And in this book, she mentions one of the statistics she found when she was researching starting Her Universe; it has to do with the greater percentage of sales being from women than from men. So . . . even though of course there should be great merch for men, too, well, it does make sense that nowadays there is so much more for women--because we definitely buy it.

And this all made me think about not just clothing. Ashley talks about these stories of girls who had been bullied, etc. for liking things like Star Wars. So much has changed in the last few years, hasn't it? Part of it has been because of Disney acquiring Star Wars--but the thing is, Ashley was stirring things up at right about that time. You had the character of Ahsoka introduced just before that and you had Ashley realizing that she could use her influence as Ahsoka to make some changes. And then we started getting all these things like those Forces of Destiny toys that are just like Barbies (a "girl toy") except that they're characters like Leia and Rey (they're so wonderful and exciting that I just had to get the Endor Leia one). It's cool and what I mean to say also is that it's amazing how one piece of influence can keep on having an effect.

Dream it and do it kind of also means that every action you take has power. You have power for passivity or power for influence. We all have a role to play and all of these roles work together in one great web that connects everyone, person to person.
Posted by Deanna Skaggs at 10:54 AM