I did at least start reading Daniel Jose Older's Last Shot: A Han and Lando Novel before watching Solo. I wasn't able to finish before the movie, though, but honestly, I don't think that mattered. Some books do set things up for the movie; Catalyst before Rogue One was a great example of that. This one kind of introduced you to the tone and to L3, but that's about it. 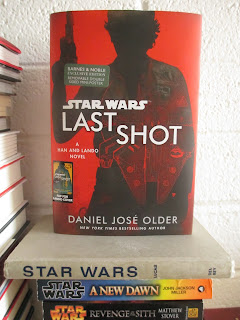 Remember how, with the movie, I said that it played out like a side scene that could have been part of a bigger story but that I just didn't overly care about as its own separate movie? There's a similar feeling in the tone of the book as with the movie--except that this was just another book among many. So in the case of the book, I was fine with just reading a random adventure. This book was fun in a casual way. I kept on forgetting who characters were each time I picked up the book again, but that didn't really matter too much: I just kept rolling with it all.

Not that it was an entirely meaningless plot. This plot was big enough that I can see other stories referring to it in the future. Though the book was a prequel to the movie, it's split between taking place pre-A New Hope and post-Return of the Jedi. And you know what that means?

Toddler Ben Solo. Toddler Ben Solo. I totally would have read this book just to get those scenes with toddler Ben Solo because they created a great character there and I always love getting these little hints at his background. Specifically, his background with his parents. Leia, the nurturing one. Han, the one who cares but just feels like he can't. Leia, the one Ben couldn't shoot down. Han, the Ben lightsabered with tears in his eyes. He thought he was killing the past but all he was killing was his father. So all of those little bits and pieces about Ben and about Han and Leia were great.

This book moved at a good pace. The pacing and the lightheartedness (which is maybe an odd word to use given that the plot did involve mutilation and potential genocide or whatever) made it an easy read.
Posted by Deanna Skaggs at 8:01 PM