Time to start giving spotlight to some chocolates that I found at the gift shop at the Phoenix Zoo when I was there for their Dinosaurs exhibit. Who knew they had such interesting options there?

Nirvana Belgian Chocolates has this organic, fair trade bar that caught my interest with its unique use of ingredients. It's a 72% Dark Chocolate with Toffee and Sesame Seeds. Toffee I like, but sesame seeds? A little weird, right? I've had M&M-style chocolate sunflower seeds before and those were alright, I guess. But I've never come across sesame seeds in chocolate before. Especially, perhaps, for bringing a unique ingredient in, the packaging on this bar veers on the basic side. Plain is fine, but this almost looks like it's trying too hard to look hipster or something. Still, all qualities considered, I had to at least try it. 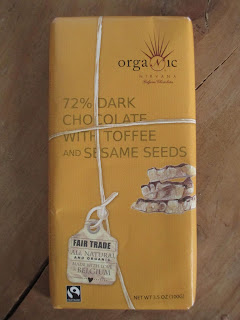 The inside wasn't too promising, apart of course from the inevitable bloom (which is all the fault of our lovely Arizona warmth and not of Nirvana). It's a plain design--which is fine but not exciting and more than that, I was picking up a basic, low-level dark chocolate aroma that made me imagine that I would not care for this chocolate.

Give things a chance, though. Give the chocolate a little crunch.

The chocolate tastes different from what I'd expected going off of the aroma. It has a slight bitter twinge to it, not big but still noticeable at first. So that means that it isn't as, well, tasteless as I'd been expecting. The bitter twinge gives it some flavor--and it also isn't as sweet as I'd been expecting. Sweet chocolate is fine, but sweet dark chocolate is weird. This chocolate does have some of what I call that thick flavor that chocolate labeled as Belgian tends to have (that flavor that I tend to dislike), but not too much. Only a bit. 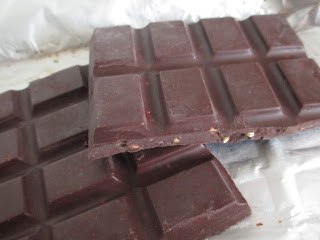 The toffee and sesame I'm still not sure if I get entirely. Were they trying to use less "unhealthy" toffee by sneaking in sesame seeds as half of the candy element? Thing is, though, not only was I not at first tasting the sesame seeds, I also wasn't really tasting much toffee, nor getting much of its specific toffee crunch (probably that part because the toffee pieces seem to be just as small as the sesame seeds). I mean, the whole effect of the crunch is a little different from what you generally come across, so little changes like that can be worth it on their own.

The thing is, though, the more I kept eating, the more that the slight bitter twinge in the chocolate disappeared (as usually happens with chocolate) and the more I become in touch with the toffee and sesame. The chocolate becomes like a fudge wrapper to enjoy them in, and I begin to taste the butteriness of the toffee and feel the contrast between the toffee and the sesame seeds. So, in fact, the set does work--not as an eat-one-piece type but as a snacking type where you eat at least a few pieces at a time. The more the better with this one. That's why it crunches, after all. Crunch, crunch, crunch, keep going, have more, crunch, crunch. And, you know, it's nice to also get that more kind of casual effect with dark chocolate.

So it all took a little bit of easing in, but this was an interesting exploration.
Posted by Deanna Skaggs at 8:21 PM