I had been hearing such tell of so many Disneyland foods that I had never tried. So for this trip, I had a mental list of many, many foods I wanted to get to--if I could fit them all in during just a short day and a half visit.

To maximize time, as well, I decided to go for the bringing-things-to-snack-while-you-walk-in method for breakfast, which would probably also allow for two lunches instead of just one. This method also meant that, only by the time we were making out way from Hyperspace Mountain and Star Tours over to the west side of the park, I was getting hungry again. And there was no line for Dole Whips, so I thought, hey, why not just get one now.

I'd never had a Dole Whip before. I was too excited to even get a picture of the pretty yellow swirl; I just started eating it instantly. And it is kind of fascinating, almost more like a popsicle than an ice cream. Nice and light, a little tangy. I did kind of eat it quickly quickly (which is unlike me) because I was expecting there to be a little bit of a line for Splash Mountain by this point in the morning but there was barely an inch of a line (maybe it had opened late that morning). 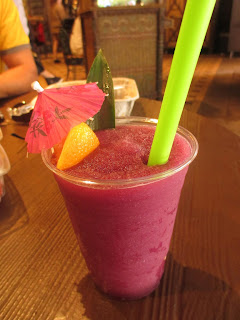 The Jungle Julep is not as exciting as the Mint Julep that you can get in New Orleans Square. That mint and lime drink is lovely; this one was okay. It was more of a slushy drink, with a fruit candy type of flavor. Pretty, though. I had the Jungle Julep because first lunch of the day (around 11:30 maybe?) was at Bengal Barbecue, another place I had never tried. The chicken skewer was good; I would get that again. But the vegetable one was disappointing, especially after I had heard that oh, they're so wonderful, the only way to get people to eat vegetables who don't usually like vegetables. The squash were fine, the onions I would have preferred cooked a little more (I stopped eating them before the end), I don't like peppers (so I didn't eat much of those, either), and the potatoes mainly tasted like cheap potatoes to me (which probably just means that they weren't organic--because yes, I can often tell--with bananas, too--I'm not trying to be snobby, there's just a taste difference).

And a Disneyland corndog? I had never had one of those. So second lunch was one from DCA. Which is funny because, well, yes, it was good, but there is also a limit to how good a corndog can be. Anyways, if the hot dog itself were better quality, then the whole thing would have been better, too. But yes, sure, it was good as corndogs go.

Dinner, by the way, was a Mint Julep and a Monte Cristo and a beignet at New Orleans Cafe. Classic.

Day two started with a ride on Autopia and then the opening of Toontown for the day (more on that later). And then breakfast from Jolly Holiday Bakery enjoyed at one of the tables there in Toontown, which was really perfect. It was that moment where I was so hungry that a croissant with egg and bacon (I always end up taking bacon out and yet I didn't this time; that's telling) and some fruit on the side was just the best thing ever. And watching Toontown in the morning before it's full of people? Somewhere on the line between peaceful and whimsical, a special tone.

Lunch that day was at Rancho del Zocalo, where, you know, I got the tostada salad for the shorter line and because tostada salads basically have all the ingredients that other dishes have, anyway. Nothing remarkable but it was good; I'd go there again if I didn't have anything else I particularly wanted to try.

And then the last thing. The last thing I ate at the parks was from Red Rose Tavern, where I went just to get the Grey Stuff and Gaston's Brew. 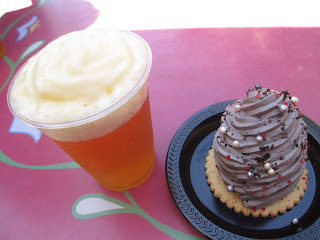 The dessert is white chocolate mousse served up on a thin sugar cookie. Hiding inside of that big swirl is cake, red velvet, I suppose. Not the absolute most amazing dessert I've ever had; mainly I had to get it because I had to have it while I had the opportunity. But it was nice and I enjoyed it. If I hadn't just had lunch, I would have been able to finish it myself; otherwise, I recommend sharing. And the brew? It's a fruity drink that's maybe not as good as the Mint Julep but is a better option for a drink than, well, standard soda and lemonade and iced tea options. The main thing about it is the way it looks: just like a foamy beer. (The foam had fallen a bit by the time I took the picture; it looked even better freshly made.)

Want to put a cap on the experience? Don't drink it at Red Rose. Walk with it to your next destination and see what kind of reactions you get from the people around you. That'll be its own entertainment.

There are times when you visit Disneyland and you just seek out the least expensive, quickest, most fueling food. It was really nice to get to try out all of these different things that I wanted, without limits. Another dash of sugar on the experience that made this trip so much fun.
Posted by Deanna Skaggs at 5:48 PM