I'm already doing a terrible job at keeping up with the new books (and not new books) that I want to read, but I enjoyed Veronica Roth's Carve the Mark so much that I took the time to reread it before its sequel, The Fates Divide, came out this spring. 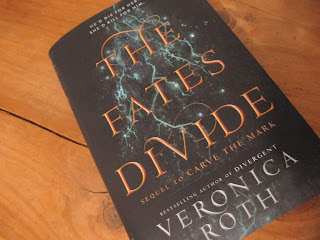 Disappointing thing was, I couldn't get into the new book. There was so much more focus on characters I didn't care for, namely Isae. There was more of a political side to the content this time (and mainly it was Isae and politics together, so that made whole chapters of very little interest to me). And even characters I did like or relationships I did like (like Cyra and Akos) were just dwelling in content I didn't care for (honestly, it felt "general YA" to me rather than what I had come to think of as specifically Veronica Roth). So the book sat for, well, months, with my bookmark about a third or so of the way in. I had other things to do than read and then I had other things to read.

Finally when I picked it up again, it got better. Turns out, I'd left off right at that turning point in a book when the tone and pace change. It returned to more of what I wanted. And I can't complain about the ending. There were, let's see, two main things that happened in the plot that I kind of predicted the second before they happened. Which means that they were things that the entire plot beforehand pointed toward but things that were difficult to guess before all of the pieces moved into place. So it all went in a good direction.

I can't really complain, then. And I'm not. I do think, though, that the best part of this story remained in the first book, along with certain pieces of this second book that tie it all in. (I'm being intentionally vague here rather than talk too much about plot.) The first book was the one with all of those great questions about character and guilt and justice and pain and duty and personal choice, etc. All of that came into play in here, as well, just not in quite the same way. In the first book, everything was fresh and sharp. Here, maybe it felt like most of the important character things were done; we just had to finish up some plot things. (I didn't think of this while I was reading, but I wonder if that means that this story was originally just one book instead of two and that it was the publishers who wanted it stretched out into two for obvious reasons.) Not that there was no plot: there was plot. And like I said, I like the direction it all went to in the end.

The idea of fate sounds worse than it is. Personal choice still exists. Positive and negative still exist; sometimes knowing how to be part of one or the other, well, that can be more complicated.
Posted by Deanna Skaggs at 8:14 PM