We have some good times where I work. Some crazy times, too, but also some fun times. And plenty of craziness. Take, for instance, ending the day with a bag of coconut mealworms and a bag of chocolate crickets. Mainly, as you would imagine, simply watching one person eat them while everyone else watched in disgusted amusement. 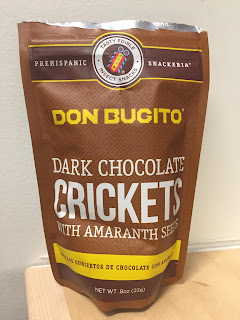 But, you know, it was chocolate . . . and I review chocolate . . . and the bag also said that it was fair trade. So I started sniffing them in my usual chocolate way; not a particularly interesting chocolate aroma, which implied to me that the chocolate wasn't anything special. And then I took one out and started examining it. I gleefully pointed out that you could see the cricket's little head peeking out of the cluster (we had been trying to figure out whether they were whole crickets or pieces of crickets).

So I quietly took the opportunity. After all, plenty of cultures eat bugs and crickets aren't really too bad as far as bugs go. I eat snails. And I think shrimp are grosser than crickets and they're the norm to eat in our society. 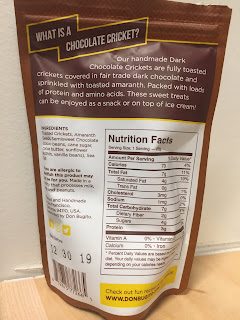 Rather than chocolate-covered crickets like chocolate-covered raisins, these are in fact chocolate clusters, which has been a growing trend. Usually I don't bother with clusters because they contain random, healthy-trendy ingredients. These, for instance, have amaranth. That is, I prefer them having amaranth to quinoa--I'm tired of seeing quinoa everywhere (tell me what's wrong with rice?) and amaranth grows so well and easily out here. The reason, of course, that it is helpful in this particular case to have random added ingredients is to disguise the fact that you're eating a cricket. Amaranth seeds will have a similar crunch to a cricket (these are toasted, by the way), so when you eat these, you can imagine that you're just eating chocolate amaranth clusters, not chocolate-covered crickets. 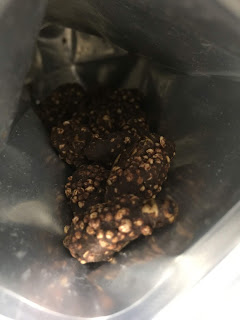 It's so easy; you don't even have to see the crickets, unless you're deliberately looking for heads like I was (and maybe not all of the heads are even peeking out). I'm sure my quick and terrible pictures do nothing for convincing you, but will anything I say change your mind, anyway? You already walked in here either okay with or not okay with eating crickets--and I doubt I can influence you to the opposite side.

Because I feed dried crickets (and mealworms) to my bearded dragon, I already know what crickets smell like. I could definitely taste that smell--which would be weird except that it isn't a bad smell. It simply is. So if you convince yourself that it's wrong, you'll see it that way; otherwise, hey, I've definitely eaten things that tasted worse.

Like I'd guessed, the amaranth effectively hides the texture. There is some thin, light, and crisp crunch that is exactly what you would expect to get from either amaranth seeds or a toasted cricket. So just think of it as amaranth if that helps.

The chocolate was better than I'd expected. That is, with something like this, you expect it to be a novelty product. So you expect terrible, sweet, oily, compounded chocolate. This was just chocolate. A little on the sweet side of a dark chocolate, perhaps, but not bad. Not amazing and probably not much on its own, but acceptable. Someone did mention that it was a little dry. Either that's because there is so much amaranth and cricket that there isn't enough chocolate to give the usual, melting-at-body-temperature feel of chocolate or the dryness is intentional. What I mean is that this chocolate is starting to make me think of chocolate I've had before.

I'm thinking of Chocolate Momotombo, these truffles out of Nicaragua that I reviewed some years ago back on Chocablog. Those I think were more moist, but they had an almost crumbliness, a more rustic texture to them that these cricket clusters are bringing to mind. Naturally, the reason I'm turning to such comparisons is that Don Bugito, who are based out of San Francisco, draws inspiration from Pre-Columbian Mexican cuisine. So they're not just creating novelty products; they're genuinely trying to put together a certain style and flavor profile. And they're trying to make it healthy and cool, too.

That's why the bags aren't clear. They're not trying to gross out Americans. They're trying to get us to take a leap, take a new perspective, get over our weirded-out-ness, and find a new food we can enjoy.

Just one last note, since this is supposed to be a chocolate review, after all. This is more of a power food, snacking cluster than a chocolate. So the chocolate is more of an ingredient than the main focus. The texture is the main focus and the flavor overall is mild and light. That being said, if you are going to try crickets for the first time, disguised in chocolate and amaranth is a good way to go for it.
Posted by Deanna Skaggs at 9:47 PM