Let me start off by saying that I highly recommend reading this article that I came across recently. It addresses what people mean when we talk about fair trade chocolate, both the important need for it and the problems that still persist even with chocolate that does have a fair trade label. I've been experiencing slight burn-out from chocolate reviewing in the past few months. I'm not as interested in trying new chocolate and I feel like I've already said what I have to say. And it's, frankly, difficult in between all the rest of a regular life to have time to find new chocolate and review that chocolate. It partly takes away my enjoyment of chocolate. And I also question why I am consuming chocolate with such regularity as one new product a week when part of my philosophy around pursuing fair trade chocolate would also be to consume less cocoa.

So if I have been reviewing less chocolate lately, partly it's because life gets busy but it is also for all of these reasons. Reading that article only further reinforced all of these thoughts.

However, chocolate reviewing is so much a part of what I do after a whole decade of it. So I'm continuing on with it. Maybe I'll go down to a review every other week; maybe I'll keep it at once a week. We'll see. Either way, I'm going to try and stop seeing it as a pressure and simply as a hobby, one that I pursue while sticking to my self-imposed rules a little better than I have been doing of late. 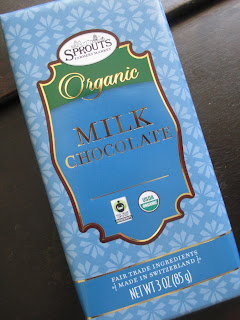 The next two bars I'll be reviewing come from Sprouts Farmers Market. I don't overly care for Sprouts (Natural Grocers is my store of choice). It's like a bigger Trader Joe's (I do shop a little there, too, and it used to be my main store, but now it isn't quite what I want); they have some good things, but also some things that just aren't quite what I seek. That being said, they do have enough values that their store brand chocolate is organic and fair trade. I don't know for how long they've had store brand chocolate since I don't shop there often enough to know, but this was the first time I had seen it.

As you'll know if you've read that article (or if you were already familiar with the fair trade system), having a fair trade label, well, sometimes it only means so much. But I still pursue the labels (or simply information about the specific cocoa farms and working with the farmers and all of that) because it's at least some progress and effort.

The blue packing is pretty and basic at the same time, with a traditional look that could be in either a good way or a bad way. I'm not sure which. It reminds me of dish soap and Andes mints. The chocolate is quite pretty, though, with starbursts on the light brown squares. 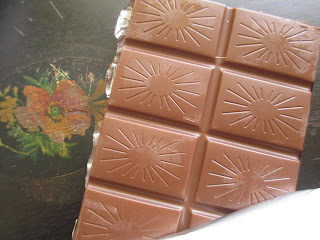 Perhaps disappointingly, the aroma is not entirely unlike Hershey's. That buttery, milky, sweet scent. But is that truly a bad thing? Look at how much Hershey's chocolate sells; people like it. So why wouldn't that be a style for a store brand to emulate?

Moving into taste, though, the chocolate is a little different from Hershey's. It's very Swiss. Yes, it has that intense creaminess and milkiness, but it also has a hit of rich cocoa that Hershey's does not offer but that Swiss milk chocolate tends to. There is no vanilla in here, which is surprising for store brand chocolate, and yet there is a deep taste as of vanilla.

It isn't one to wow the palate, but it's a nice, creamy milk chocolate for when you want milk chocolate. As more chocolate is coming with some kind of fair trade label, such chocolate is becoming more readily available and so the range of things that I can review is in fact increasing. So I'm still finding things to review even as I miss out on the artisan chocolates. It's nice but also sad: I'm not having as much of that artisan chocolate and while the system is improving, it's only improving slightly and yet in such a way that we're imaging the problems are all fixed when they're not.

So that's where I am right now when it comes to chocolate--and this bar was probably the perfect way of illustrating to you where my headspace is right now.
Posted by Deanna Skaggs at 10:49 AM