I admit, I tend to just overlook all the Sedona chocolate. Even though the Scottsdale chocolate is exciting, the Sedona chocolate, like Sedona itself, is in its own zone. For anyone unfamiliar with Sedona (which is a beautiful tourist destination of Red Rocks), the town is also known for New Age culture. So most of the chocolate out of Sedona is raw--and I always hesitate around raw chocolate. Of course, none of it is technically completely raw: it's just heated, during production, to a lower temperature than most chocolate. So there is something inherently false-sounding to the concept of raw, modern-style chocolate--and it's something that I personally find unnecessary. With all that being said, though, let's just take a look at the chocolate itself. 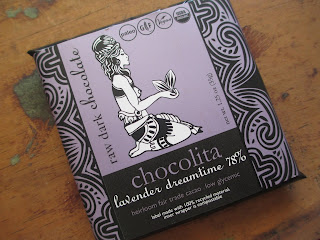 On the inside of the wrapper for this Chocolatita bar, there is an explanation about bringing back chocolate as a superfood rather than junk food. That I am absolutely all for: if you're going to add junk to chocolate, don't even bother using chocolate, right? 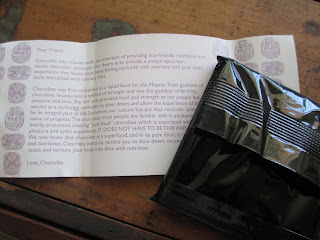 The wrapper opens up to a strong lavender aroma, all minty and peppery. For this is, after all, the Lavender Dreamline 78%. The Mayan goddess Ixcacau (the goddess of chocolate) who is pictured on the outside also adorns the chocolate squares. Fitting and very Sedona. Flip the bar over and you'll see sprinkled lavender. 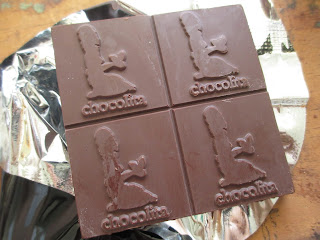 Texture-wise, the chocolate feels a little stiff, like it's almost getting a little old. It's less inclined to melt in your mouth, so it works better if you help it out a bit with some munching. I have had coarser raw chocolate before, though, so I would guess that this one was heated to a higher temperature than some. The texture difference from standard chocolate isn't super noticeable, though; again, it's mostly as if the chocolate is just a tad old. 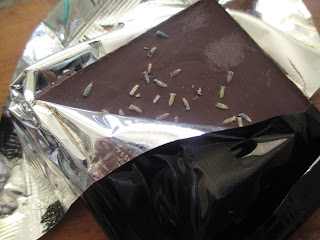 Mainly it all tastes of springy lavender. The lavender is the strongest flavor, so I can't get too many details on the chocolate by itself. Mainly it seems like a solid and decent 78% chocolate; I'm tasting neither sweetness nor bitterness. Now, I didn't look at the ingredients list because I imagined that there probably would be some secrets in there and I didn't want to imagine to myself that I could taste any of those secrets when I actually couldn't. I didn't want the mere suggestion to make me say that there was a strange, indefinable taste in there. The secrets are coconut palm sugar (as opposed to cane sugar), vanilla (just a standard ingredient, but I thought I'd mention it while I'm at it), sea salt, mugwort (which is supposed to help fight fatigue), and gotu kola (which is a plant that has various uses). I just tasted lavender, so if you would like all of this in your chocolate, well, it didn't have any adverse effects on flavor.

So the whole raw chocolate topic aside, I do appreciate the use of better quality ingredients. This chocolate is also organic and fair trade. The label says that it's heirloom cacao; it would be nice to also know the specific type of cocoa beans. As a lavender chocolate, it's nice.
Posted by Deanna Skaggs at 8:13 AM