The companion to the Sprouts store-brand Milk Chocolate from last week is their Dark Chocolate 72%. It comes along with the same generic packaging. Maybe it's my bias against red, but this one is even less successful than the Milk Chocolate's look. The Christmas-reminiscent red and green also remind me of a hotel--perhaps specifically the hotel in Home Alone 2. There is a certain niceness to red and green and gold, but it only goes so far. Mainly it's just generic (inevitably, though, right, for the store-brand?). 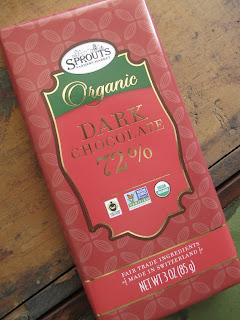 The bar inside still comes with that pleasant starburst design, though. I found the aroma less than enticing, indicating a sweetness level just a touch away from confection dark chocolate. I can eat sweet milk chocolate because sweetness is part of the nature of milk chocolate (though there is of course also such a thing as fantastic artisan milk chocolate), but sweet dark chocolate turns me away. 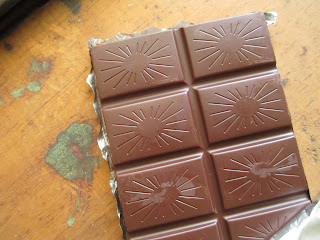 In reality, though, this chocolate was fine. It works right away into a bittersweet flavor that is not entirely unlike Ghirardelli. Not that Ghirardelli is on the top tier of the chocolate world, but they're a steady standard with mass appeal. So mainly the chocolate is on the sweeter side but with that sense of bitterness to it that is still different from the bitterness that you would find in an artisan chocolate. It has that silky texture that, if just a little deeper, would be too smooth. The chocolate melts away with that warm, red, brownie taste and just a mild touch of richness.

So better than I thought it would be. Generic and nice. Mass appeal over uniqueness and character. Like with Ghirardelli, it would be great for using as chocolate chips. My recommendations aren't particularly hearty; however, if this were a model for generic, store-brand chocolate, then the chocolate world would definitely be coming into a better place. This is what the starting point for dark chocolate ought to be, with everything else going up from here.
Posted by Deanna Skaggs at 7:58 AM