A pretty summery chocolate is on the table today. It is Dark Chocolate Topped with Apricots, Honey, Marigold Petals, and Bee Pollen by Ethereal Craft Chocolate. I would call this part of the emerging chocolate scene: it has that boutique gift shop look to it and yet it is also called bean to bar, organic, and ethically sourced (and since I've been on the soapbox so often lately, I'll also mention that chocolate like this can [though of course isn't necessarily] in fact be more ethical than chocolate that has a certified fair trade label). Cute but with some substance? 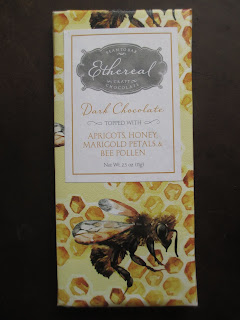 The pretty bee and honeycomb paper is quite thick and slightly textured. The chocolate bar, too, has a lovely, curvy design to the mold on one side and then all of the flowers and fruit on the other side (with a chocolate like this, you can't really call the toppings side the back). All of the toppings mean that this is essentially chocolate bark. 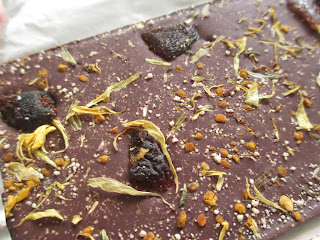 Being that those toppings are mainly dry, they don't get across in the aroma; that simply consists of semisweet chocolate. Trying the chocolate first smooth side down reveals that same semisweet chocolate flavor akin to Ghirardelli chocolate. I thought about what other flavors I was supposed to be picking up--there was perhaps something floral? Ah, yes, that would be the marigold petals. Interesting choice: usually rose, violet, and lavender are the standards for chocolate, so it's nice to see another flower. 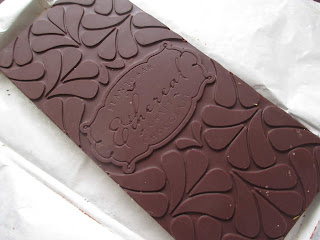 Trying topping side down next brought in some texture, though at first I didn't taste anything more. Then as I settled into something crumbly, I found sweetness. That would be the honey. The ingredients list this as honey granules, which are made with cane sugar and honey. While under other circumstances it would be undesirable to mix honey and sugar, in this case the sugar gives the honey texture so that it can be a topping of its own instead of just something mixed into the chocolate. I mean, bee pollen has some honey flavor, too, but adding in the honey granules probably gives more of a typically-expected honey taste.

Moving inward, I came to the apricot. I suppose I never really eat dried apricot, so I haven't much to compare this one to. Yet it was excellent, nice and sweet. The size is big enough to taste and also not so big as to interfere.

I do have one little note, though. I didn't get a picture because I didn't notice it until later, but one side of the bar was half the thickness of the other side. Given that I'm sure that isn't intentional, I just had to give it a little mention. It doesn't negatively impact the chocolate: I enjoyed the thin side just as much as the thick side. It's just, as I mentioned, a note.

Overall, it's a lovely bar, one I'm enjoyed much more than I'd expected to. Sometimes with the pretty, boutique gift shop chocolate bars, I expect them to just look nice and sound nice but to not delivery much. Not the case here. This chocolate delivers exactly what's promised: dark chocolate with pretty, summery toppings.

Posted by Deanna Skaggs at 9:04 PM