I say that I like Star Wars because it's fantasy. So a new book called Star Wars: Myths and Fables with a dragon on the cover? Yes, please.

Strangely, though, such a great book didn't seem to get much in the way of the usual Star Wars marketing. The stores near me didn't even have it in stock. I thought, okay, they'll probably just get it in later. After some weeks had passed, though, and they still didn't have it, I decided to go over to a store over in that direction that I don't usually drive to because they had it in stock. (I'm weird so I preferred to do this rather than either order online or have the store order it specifically for me.) I got there and couldn't find it, so I asked for help, only to be told that it was an ebook only. What?

When I got home, I checked the page again myself because how could I not have noticed that, even if a weird fluke in the system was saying that store had a book physically in stock that was not a physical book. Sure enough, it said it was a hardcover. So I ordered it online after all because how could I be ordering a book to be shipped to me that was only an ebook? 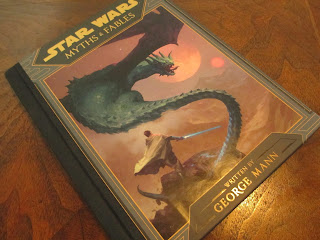 Quite a beautiful ebook, too, eh? It's a slightly oversized hardcover, though fairly slim. The book design and that fantastic dragon cover make it suitable as a coffee table book--so again, I really don't understand why this book wasn't stocked more. There must be a story to it: I can see this being an impulse buy for so many people simply because it looks so great.

There are nine stories in this book. They are distinct from short story collections that have come out in the past. George Mann purposefully gave the writing that myth tone that is evocative of things like Beowulf. That simple style and frequent use of passive voice. It's all meant to sound like stories told out loud, to children and adults alike, over generations. At times, some could come out to be a tad more simplistic than I would like, but perhaps that's because I prefer the myths angle to the fables angle and many of these tried to hit that line right in between the two.

More Galaxy's Edge in here, but not hampered by deliberate marketing. Here, Batuu was simply a location.

Overall this was a terribly fun book for a lit. person; it brought back lots of college memories and I kept wondering what topics it would inspire if we'd included it in one of my classes. And Obi-Wan lightsaber battling a dragon? That alone made it all worth it.
Posted by Deanna Skaggs at 12:41 PM