Beneath the Black Spires

The latest book set in Galaxy's Edge is Delilah S. Dawson's Black Spire. She previously wrote Phasma, and this book takes off with some of the characters introduced there, though it isn't necessary to have read that one to read this one. Now, Delilah S. Dawson had a little bit of an advantage over Zoraida Cordova in writing her Galaxy's Edge book: she wasn't limited by the constraints of YA. While all of the references to things available in the theme park felt obvious and canned in YA, in an adult novel, they could be fleshed out with more details and have more of a seamless feel. Usually. (And I am not saying anything against the YA genre right now; it's just a fact that A Crash of Fate had a simpler writing stye with fewer details.) 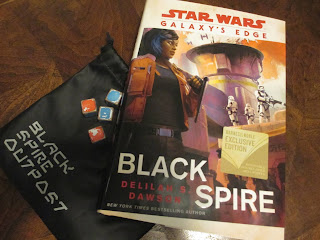 I suppose also by this point I've been reading quite a bit about Black Spire Outpost, so it is starting to feel very much like a real place, a place that physically exists, a place where I have been and will be visiting again soon. I think of it and it almost feels like thinking of somewhere like Santa Fe, a place you adventure to and end up using as a place for self-contemplation. And all of the petrified trees remind me of the Petrified Forest/Painted Desert, which is one of my favorite places in Arizona. Now when I go to Oga's Cantina, I'll know I'm in the domain of the "ruler" of Black Spire. When I go to Dok Ondar's, I'll know to have caution. And if I visit Savi's Workshop, I'll know his place in it all.

Speaking of Savi, that's an interesting connection there to Lor San Tekka. His character is one of the mysteries still sitting unsolved in the films, so we started to get a little bit of his background here. This book turned out to be up there with books like Claudia Gray's Bloodline as far as giving away  info directly related to theorizing about the films.

Even though I didn't think I was at all interested in Phasma's character, I ended up enjoying the book about her, and I found many of the same types of things to like in this one, as well. Characterization was front and center, even if we got some action along the way. And we had a good helping of nature and small communities and rural living, the types of things I always end up enjoying best.

Honestly, it was just a fun read, what felt like a return to classic Star Wars. Just a good old story about some random characters having to find themselves, to deal with their brokenness or their self-doubt, some people who get thrown together and find a greater story at work in the galaxy, a greater meaning in the web of events that unfold. Sure, now we know what Vi Moradi is doing at Galaxy's Edge, but Disneyland aside, we also simply got a good novel. Not shameless marketing, just a story that needed to be told.
Posted by Deanna Skaggs at 6:58 PM