The Future of Downton

One movie after several TV seasons of a show doesn't give the opportunity for much--especially when the show had movie length episodes. But it was simply the idea of a Downton Abbey movie that got all of us excited. Just one last glimpse at that world.

So that's exactly what the movie provided. They didn't have the time to create complicated plots that altered the course of it all, so they simply found a plot that would showcase the setting's favorite aspects. The king is coming over, so it will be all about decorum, show, rules, etiquette, planning, and drama, too. 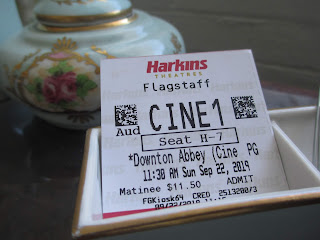 The twists were three: Lady Bagshaw's maid and her actual identity, Branson's interference with the assassination attempt (as well as his interest in the aforementioned maid), and Thomas's attempted venture out into the world. The third twist was a bit of history with the interests of today in mind. The  second was mainly what we had already seen before. And the first was significant enough to be the main plot.

It is, after all, the closest to new information that we received, what with hearing that Lord Grantham would have been the heir if not for the maid. It's once again an expression of the painful side of living on top, where your life is decided for you and you can't make your own choices or follow your own wishes. But it is also a way of leaning towards the future.

And that's exactly how it is. Downton does still exist, though it has a different name in real life. But the family don't live there the whole year and they don't live in the whole house. Certainly there are upper class circles where most of us will never find ourselves. But people do move between circles. People rise suddenly (or slowly). And sometimes people meet people from different circles and grow close, anyway. The time of Downton did not end--but it greatly changed.
Posted by Deanna Skaggs at 4:13 PM