The problem with trying to review seasonal chocolate is not just that it's hard to find much seasonal chocolate (outside of a chocolate shop) but also that most companies are going to repeat the same product year after year. Which is fine. Too many experiments or too much expectation for new things tends to just turn up strangeness. But it does mean that after I've looked at, for instance, all of Theo's Christmas chocolate bars, I'm done and have nothing more to review from them. 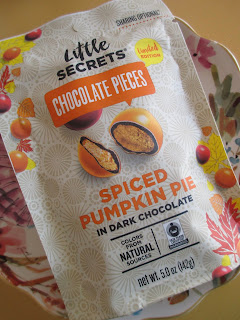 Little Secrets, though, is still a fairly new company, so I still have ground to explore with them. I started with their Peppermint Dark Chocolate Pieces two years ago, and now I'm on to their fall option, the Spiced Pumpkin Pie Chocolate Pieces. I like pumpkin pie as much as the next person, but I don't understand the pumpkin spice obsession. Is this the only fall flavor combination available? Still, pumpkin spices and even pumpkin itself go better with chocolate than with many of the products out there. 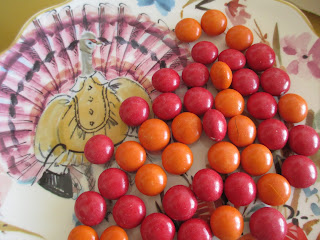 The pieces, which are about the size of Peanut M&M's, are orange and red like fallen leaves (colored with vegetable juice and turmeric instead of artificial colorings). The pumpkin inside is not orange like in the picture on the bag; it's cream-colored. But there is in fact pumpkin in there. This isn't pumpkin spice; it's spiced pumpkin. 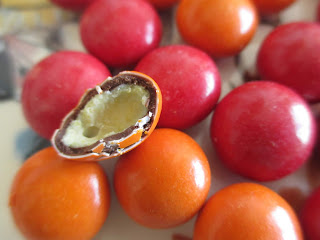 Inside that crunchy candy shell, the filling is quite soft to bite into. The main spice is ginger. A little cinnamon, too, but mainly ginger. Maybe some nutmeg, too. Since there is pumpkin, you can taste a little of that sort of hollow taste that pumpkin has. There is only a brush of chocolate; it's really just there for the fun of it. Probably without the chocolate, this would all taste sweeter and more cloying, but the chocolate itself isn't a strongly noticeable flavor.

I didn't overly care for the adventure Little Secrets made into chocolate wafers, but they do great work with their candy coated chocolates. Fair trade chocolate, seasonal and popular flavor, and good candy. Even not being on the pumpkin spice bandwagon, I could see buying a bag of these every year. If I'm going to get a pumpkin product or a pumpkin spice product, this one works. If I were to offer constructive criticism, I would suggest that Little Secrets also begins to use organic ingredients. And I do prefer not to see palm oil in the ingredients. That being said, they still have plenty going for them.
Posted by Deanna Skaggs at 7:54 AM