Yesterday we looked at Theo's Peppermint Stick dark chocolate bar; today we have another peppermint dark chocolate, except in candy form. And I must admit that when I first bought this bag of candy, I somehow mistook it for another Theo product; it must have been the handwriting font up on top. Even though this candy is in fact from a company called Little Secrets instead of from Theo, the two companies do share some similarities. This is still fair trade chocolate with a more natural, yet casual, vibe. No artificial colors/ flavors and no corn syrup (even Theo's bar had corn syrup, even if it was non-GMO corn syrup). This was my first time seeing Little Secrets before, so I'm guessing that they're a newer company. They're based out of Boulder, Colorado, by the way. 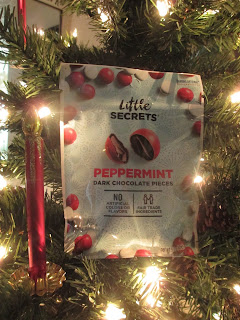 Notice that I freely use the word candy here. This is candy, wrapped up like candy and designed like candy and marketed like candy, except that it has all of the positive traits I just mentioned. That's perfect: truffles and artisan chocolate bars are great, but we all need plain candy sometimes, too.

The bag tears open and also has a resealable top since this is a bigger bag than the standard M&M bag size. The cost was under $4 for 5 oz., which isn't bad. With that being said, it would be nice if they also offered a smaller bag size just so that people also see a smaller price tag (and they may already have different sized bags, but these were the only ones that I have seen so far). 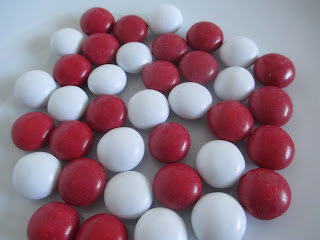 Let's continue with our M&M's comparison since everyone is familiar with M&M's. These candies are bigger than M&M's, probably more the size of peanut M&M's, except of course not with that shape. They don't have quite as much of a wax glaze as most candies have, and they come in red and white for the standard peppermint look. As soon as I opened the bag, I could smell the peppermint, and I do have to mention that the peppermint flavor here is stronger and to my view more balanced than it was in the Theo bar yesterday. 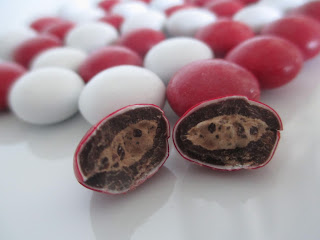 Because these candies are slightly big, they have plenty of texture from that candy shell, the texture and taste of which we're all essentially familiar. Mainly it is this crunch and the peppermint flavor that take most of your attention; the chocolate is almost more like the third element rather than the first or second. This is 55% cocoa content chocolate, so it's on the sweeter side, which is completely appropriate for this context. Given that you only get small pieces of chocolate at a time and that there is all of the candy coating and peppermint, I can't get a good grasp on what the chocolate would taste like on its own--but again, this chocolate is good for this context. Little Secrets sticks to candy coated chocolate pieces in the same way that Bite Beauty only makes lip colors instead of also adding in other makeup products or that In-N-Out only makes hamburgers and fries.

If you couldn't tell already, I prefer these candies to yesterday's peppermint chocolate. Their composition feels more balanced. And they're also more fun and flavorful--and there are more ways in which you can use them. Put them in a stocking, in a candy bowl, or on desserts, just like you'd do with M&M's. It feels different to be reviewing chocolate candy again, but I like it. If I'm buying chocolate candy these days, this is the type of product I want to buy.
Posted by Deanna Skaggs at 12:56 PM