Cobalt Squadron by Elizabeth Wein seemed like it would be the perfect short novel to give us more details and backstory on a set of characters that we only briefly saw in The Last Jedi. The look of the (physical) book matches the style of Before the Awakening, which was a great pre-story to The Force Awakens. Turns out, though, that Cobalt Squadron was kind of disappointing. 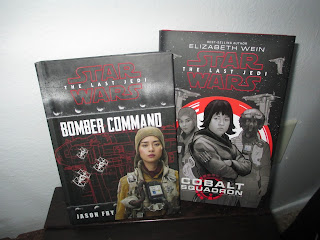 I'm not entirely sure about the target audience for these books. Obviously I think that, despite the target audience age, people of any age can read a book whose target audience is younger than they are, as long as the book is good. But this book read, well, too young. I felt like I was reading a Disney Channel movie. Everything felt false and contrived, including the sisterhood between Rose and Paige--and I liked both of their characters in the film. So to come here excited to hear more about them only to get a flat representation of their story just didn't go over well for me. Also, I found this story less interesting because it takes place mainly in space with space battles and that sort of thing that I just generally find . . . less interesting.

I followed up right away with Jason Fry's Bomber Command, which is in the same style as Rey's Survival Guide. So kind of a combination of scrapbook and journal styles, with lots of picture and "handwritten" text. Cobalt Squadron was already a quick read at about 250 short pages, and this book was even quicker. While I can't say it was as good as Rey's Survival Guide, I did much prefer this one to Cobalt Squadron. Maybe Jason Fry just has more experience writing Star Wars. Maybe the informal book style meant that the tone of the book fell into place better. Maybe I just liked it because we got much of the same information as with the first book, just in a shorter and quicker space.

You could in fact skip Cobalt Squadron and just read Bomber Command, even though you'd think it would be preferable to do the opposite. Overall, though, the backstory that we got for Rose and Paige and their team wasn't what I wanted. Sure, it was nice to hear certain details (like how Rose came to be on a separate ship from Paige in The Last Jedi--and we also got more of a look at Admiral Holdo). But more of it wasn't satisfying; that Disney Channel tone may have even detracted from my view of these characters.

I guess since I walked out of the film saying positive things, I had to come back now and say some negative things about these two companion books. Balance. It's all about the balance.
Posted by Deanna Skaggs at 5:13 PM