Sometimes I have to scramble to find chocolate to review. Right now, though, I have too many in waiting--and yet I keep buying more. So I'll be mixing things up (instead of going in order) so that I can get the seasonal flavors in on time (lots of minty chocolate coming up). Like this week, chocolate reviews might not be just on Fridays like they usually are: I'm trying to stick to posting two reviews a week even if I've fallen off schedule.

Today's chocolate is a Maple Pecan bar from Stone Grindz; it uses a 68% dark chocolate. In the style of chocolate bark, you can see a crumbly mixture of crushed pecans on the back. The aroma of the chocolate is the smooth scent of cocoa butter. 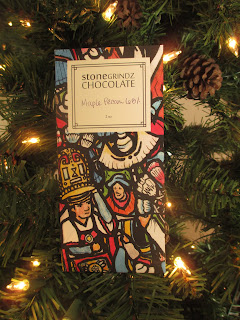 I made a mistake with the first square I ate: I kept on looking at the pecan side as the top. So I started chewing the chocolate (as I usually do when there is a crunchy element), waiting to taste the maple and pecan. I found that there wasn't much to chew, after all (the pecans are in small pieces), and neither was there much maple or pecan to taste. Some, but not enough. You see my mistake, right?

The pecan side of the bar is bottom, not the top. That is, it's the side that should hit your tongue first. When trying the chocolate this way, I right away tasted the pecans with their sweet, earthy flavor and also the sweetness of the maple; the chocolate came in as a base rather than the main element. The other way around, by the time I'd made my way through the chocolate, the pecans and maple were half gone. Right side up, the pecans get your attention first so that you keep them more in the center even once you get to the chocolate. 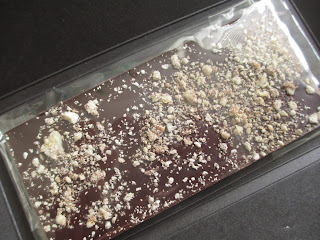 And the chocolate is a good base. I want to call it a sweeter type of dark chocolate, though it isn't really sweet, of course. Semisweet would be the word, I suppose (I guess I don't tend to use that word since it just reminds me of chocolate chips). What I mean is that it isn't specifically dark: it's inviting and gentle and gives the idea of sweetness (as opposed to the deeply rich or even bitter flavor of darker chocolates) to pair nicely with the more casual elements of the pecans and maple.

So this is a nice fall/winter bar. You can even put this one into the category of candy bar alternatives if you like because it does have that sweeter, reminiscent-of-dessert side to it. Perfect for gifting or stockings, eh?
Posted by Deanna Skaggs at 1:42 PM