It's been over a year since I first discovered Untamed Confections (click here for my review of their Midnight Gold Dark Chocolate). While they do sell online, I'm not much of an online shopper, especially when it comes to chocolate. They're at festivals and such often, but usually in the southern part of the state (they're based out of Tubac) and I almost never end up south of the greater Phoenix area. I finally, though, caught them this past weekend at the Tempe Festival of the Arts (which had a great selection of vendors, by the way). My main goal? The tortoises that I passed on last time and then regretted not getting. (I also got two flavored chocolate bars this time, which I will review eventually.) 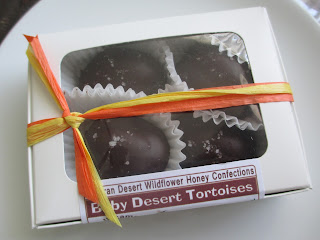 Specifically, these are the Baby Desert Tortoises. They also have regular-sized tortoises and bigger boxes, but I stuck with the small, four-piece box of baby tortoises. At ten dollars, each one comes out to $2.50, which is an average price. The chocolates are made with honey glazed pecans, dark chocolate, and honey caramel with fleur de sel on top. Untamed Confections, you might recall, uses honey instead of sugar, so let me give you their full ingredients list: desert wild flower honey, organic cream, organic fair trade chocolate, organic pecans, organic butter, organic vanilla, Sea of Cortez salt, fleur de sel. How is that for a confection? Not only no sugar but also no corn syrup. It's a good-looking list. 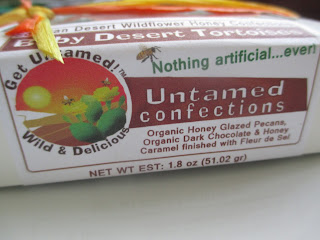 The tortoises (and yes, they're tortoises, not turtles because we're in the Southwest, have to keep with that theme) come in the usual plain white box that Untamed uses, just with a window this time. They themselves are also visually simple, just little lumps of chocolate (about the size of two truffles put together) with some chunky sea salt on top. When I sliced open one of the tortoises, I found the pecan half hidden inside a nest of caramel. 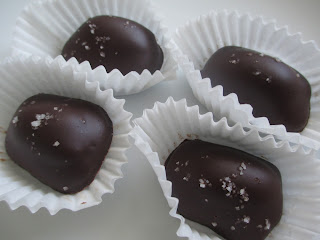 Because that salt comes in big flakes, you get its flavor right away even though it's on the top. Then you get the texture of that chewy caramel and some of its vanilla flavor. Because the pecan is hiding in the middle, its taste and texture are a minor addition to the mix; mainly, you're getting caramel simply because there is more of it (and because it's the chewy kind). You also get some chocolate, mainly in the first half; it adds that kind marshmallow flavor to it all. It isn't exactly either "sweet" or "dark" chocolate, so it makes for more of a neutral flavor base for the caramel. 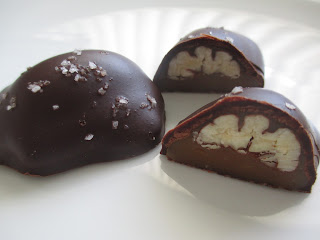 As I go about eating these, I remember that the company is called Untamed Confections. Before, I thought of the fact that they make chocolate and caramel--and I guess I was considering that the confection part referred more to the caramel. But this piece brings together both products and settles the chocolate into the confection zone. The chewy style of caramel reminds me more of candies than truffles. The flavors, while nice, are nice in a simple way. Which is all fine: sometimes that's what we want. Nothing unpretentious or unapproachable, just a pecan half surrounded by caramel and dipped in chocolate and topped with salt. And just because that's what's on offer doesn't mean it can't have that better ingredients list (especially the fair trade part).

This product is an example of good, honest labeling. Exactly what you see really is exactly what you get. As I contemplate my final words, I find myself reaching for another tortoise. These are easy to keep eating: all of that texture plus some chocolate plus a bit of salt all make for an addicting mix. So maybe get a bigger box than this one if you're planning on sharing.
Posted by Deanna Skaggs at 3:18 PM