Camp Verde has a few events throughout the year. I usually try and go to Fort Verde Days in September or October, but that's about it. A week and a half ago, though, I went to the Pecan and Wine Festival, just to go. And what did I find there? Chocolate, my friends, chocolate from Arizona.

Untamed Confections is based out of Tubac, which is way on the southern edge of the state--about an hour south of Tucson. In fact, it's far enough away that I'm honored they brought a booth all the way up to central Arizona. Side note: they also keep a kiosk in Bisbee (a historic town a couple of hours east of Tubac, or south of Tucson--it's fairly close to Tombstone, and I hear it's more authentic and less touristy than Tombstone). The edge to Untamed Confections is their use of honey as a sweetener instead of sugar. 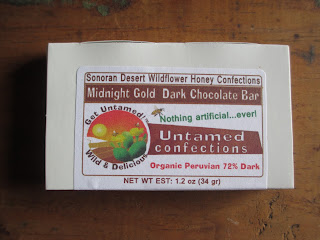 While I'm not personally opposed to using some sugar, I'm also all for replacing it with honey. (There's a chocolate I've been seeing around that's sweetened with stevia--and I've been refusing to try it because I don't really see the point.) Honey is delicious, healthy, and environmentally friendly; it's one of those perfect foods (just ask John the Baptist--and honey is much more approachable than locusts).

In addition to the use of honey, their confections are made without artificial ingredients. The plain chocolate has just three ingredients: organic and Fair Trade chocolate made with Peruvian cocoa beans, unfiltered Sonoran Desert honey, and organic vanilla. They work with beekeepers in the area to obtain their honey, noting that these beekeepers keep their bees away from areas with pesticides. I forgot to ask if they make their chocolate from the bean--and if they source it themselves.

The look of the Untamed Confections packaging is quite basic (they call it earth friendly and biodegradable). In fact, for the company's tagline being "Wild & Delicious," this is rather tame packaging. Not that I mind: the look is also handmade and local and small business-like, which are all positives. The white box is the only thing protecting the chocolate (no wrapper or foil), therefore the chocolate only lasts about six months (about half the usual time, if I'm not mistaken)--but why do you need it to last for a year, anyway? This little 32 gram bar came in at $5, which is on the expensive side, yes, but good chocolate and good honey both come at a price. I'd imagine the honey alone marks up the price a good amount. 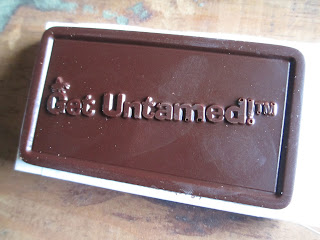 At the festival, they were giving out samples at their booth. So I did get a chance to try this chocolate before buying it. Sadly, I think they weren't getting much business: maybe it was just too early in the afternoon? If they were in Flagstaff, though, I bet they would've sold out. Sigh--different markets.

The little chocolate bar is as cute as its box is simple. A smooth surface (glossy at just the right level) with a thin border proclaims "Get Untamed!" and holds a tiny bee on one of the letters in homage to the bees that made the honey to sweeten this chocolate. It's well-molded, with just a couple of tiny air bubbles. Interesting, though, are the slightly raw edges on two of the bar's four sides. It looks as though these bars are made in a mold that holds at least four of them, then broken apart into individual rectangles. 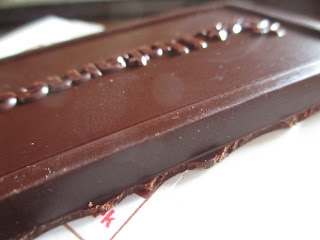 The chocolate has a great snap to it and a consistent look on the inside. The texture is singular. When I tried the sample (since it was such a small piece), I thought it might just be a slightly dusty texture. But when I try it again at home with a bigger piece, I'm reminded of raw chocolate. Raw chocolate has a softer, almost crumbly texture that varies depending on the company and the techniques they use (some are willing to heat the chocolate more than others are). Untamed Confections doesn't say anything about raw chocolate and I'm not saying that it's quite that exact texture. It's just a little reminiscent of it: it's a little softer, a little less silky, a little less prone to crumble and therefore more a chocolate to munch on (versus letting it slowly melt away).

This texture can make the chocolate feel more dessert-like--and therefore suitable for more types of sweet cravings. Speaking of sweetness, let's take about the sweetness level of this chocolate. The cocoa content is 72%, a nice average dark chocolate percentage. It's neither sweet nor bitter nor flat nor full of flavor notes. So the sweetness is at exactly the right level, enough to balance out the chocolate and yet not taking over. I wouldn't say that I taste honey--but there is a sense of something different from usual, something more food-like and less-processed (this should not be taken to mean that this chocolate tastes like a health food, which it certainly doesn't: it just takes more real).

Untamed Confections also makes flavored chocolates and caramels and honeymallows and other confections, including the Salted Desert Tortoise (pecans, honey vanilla caramel, and chocolate), which I rather regret not buying when it was right in front of me. They do sell online, too, if you're an online shopper. And if you've been looking for a chocolate sweetened with something other than sugar, having this one shipped to you will be worth it: the taste is good and addicting.
Posted by Deanna Skaggs at 5:07 PM