Did I just name this post a haul? I must be watching too many YouTube videos--probably because I had fallen months behind in my subscriptions and finally finished catching up.

In Prescott Valley, there is a thrift store right off of the 69 (if you know the area, you'll know which one I mean). They have a room (or two small rooms is more like it) to one side filled with bookshelves. And here's the best part: except for a few that are marked differently (a very few), they're all $1 for hardcovers and 50 cents for paperbacks. Much lower prices than Goodwill's--and they have a bigger and often more varied selection than Goodwill's. So it's turned into my favorite place to get used books. 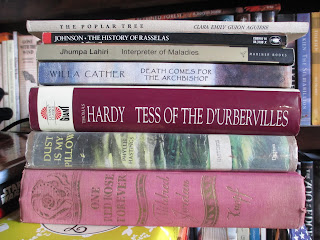 Used books are interesting. Sometimes you just find piles of books that were made into movies recently, and there are always plenty of cheap trade paperbacks (you know, the romance novels and such). But sometimes you can get books inexpensively that generally cost a lot more (like classics that you kind of want to read but don't want to pay for) or just random books that you really enjoy but wouldn't have happened across in a new bookstore. 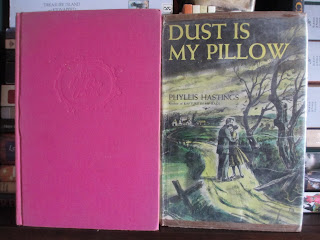 First we have a pink, clothbound book without its book jacket. One Rose Forever by Mildred Jordan, publication date 1941, first edition. And it's signed (the store has a separate shelf for signed books, but this one wasn't on it: either they didn't notice or didn't think it mattered). I don't really know what this book is about, but its cloth and title interested me, as did the fact that it's signed. I just hope it isn't a romance (love story, fine, but romance, no). 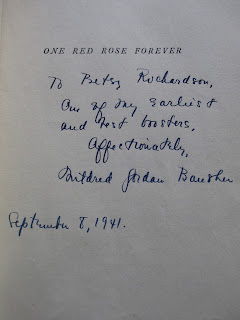 Next is a discarded library book (it's marked Phoenix Public Library). Dust Is My Pillow by Phyllis Hastings, 1955, first edition. I liked the title. The summary sounded interesting, something about people on a farm, and the bits of writing that I read from the inside looked good.

Then we have some classics. Tess of the D'Urbervilles by Thomas Hardy, the 1995 edition by Courage Books. It maybe isn't the most preferable edition, but it's hardcover and in good condition and the paper is good quality with nice sized print. So it's really not bad. I've been thinking of reading this book, so for $1 I might get around to it. 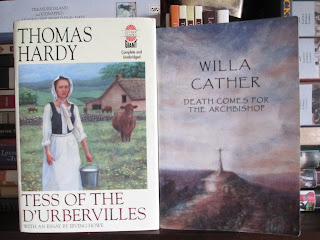 I keep collecting Willa Cather books as if I like her, even though I've never actually read one of her books. But I think I'll like her writing, so I keep buying them. This one is Death Comes for the Archbishop, the 1995 edition for Quality Paperback Book Club (a label I'd certainly never heard of). It's a pretty edition, not too worn for being a 21 year old paperback, and the book takes place in New Mexico.

Then we have a short story collection, Interpreter of Maladies by Jhumpa Lahiri, 1999 by Mariner Books. I read a little from Jhumpa Lahiri in one of my college classes, and I really liked her style, so I was pretty excited at the chance to read more from her. 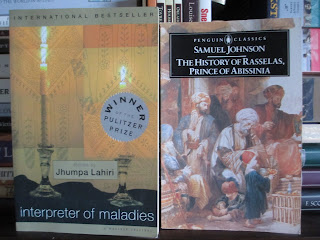 The History of Rasselas, Prince of Abyssinia by Samuel Johnson, 1985 Penguin edition. This, unless I'm mistaken, is the book that Helen is reading in Jane Eyre, the one whose title sounds interesting to Jane until she discovers it isn't a fantasy story. As an oddity, I thought it might be fun to see what it's like (it isn't very long). Other Victorian writers reference Samuel Johnson, too, after all, so it's another way of looking at things to read what they read. 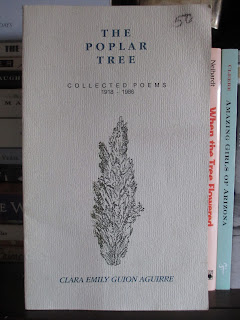 Last is a book of poetry, The Poplar Tree by Clara Emily Guion Aguirre, 1988 by Nightjar Press. It seemed like a nice book to me, with sprinklings of nature and sweetness and yet not at all cloying or fake or dull. Then I saw in the author bio at the back that the writer was raised in New Mexico. Ah. New Mexico is wonderful. The book comes with me, something that perhaps few others would consider but something I'm so grateful to happen upon, something I wouldn't have found elsewhere.

Posted by Deanna Skaggs at 6:07 PM