TLOTR on Stage, or in a Book

How can someone become obsessed with a musical they've never actually seen? Quite easily, apparently.

Back around 2007 or 2008 or somewhere around there, I was pretty obsessed with The Lord of the Rings Stage Production (I call it a musical usually, but even though it had music and songs, it wasn't exactly called a musical). I would watch the official clips on YouTube, trying to imagine how they all fit in together and to picture what it would be like to watch from the audience. Eventually I bought the soundtrack (at least that was available to me), and I've continued to return to it, usually having to listen to almost every track (even when I had thought to just listen to one or two). 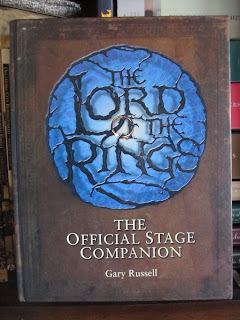 Those songs have stayed living in my head over the years, and I never gave up on the possibility of seeing the production live: there was talk about a world tour in 2015. But 2015 came and went and there was no world tour (I'd been hoping they'd do a stop in LA that I would be able to go over for); I think the rumor is that funding held them back (it was a pretty expensive production, and one with large sets and a crazy stage that would be difficult to move around).

I did, however, get the next best thing. I got the companion book. I'd been wanting it for some time, and finally when I got a gift card for Christmas, I knew what I had to spend it on. So much time has passed that unless you want to spend lots of money, you have to get the book secondhand--but I was able to get a nice copy that's as good as new. So I'm very thankful.

It's quite a nice book, too. A sturdy hardcover, it's designed to look like leather, with the production's blue logo up on front. There are lots of pictures, too, which was one of the major draws for me. I took my time staring at them all (which is one of the reasons why it took me so long to get through this book), and they filled in gaps of missing scenes that I had never seen from the video clips.

The way the book is divided up, there is a lot of space in the beginning devoted to the technical side of trying to get a production started. While all of this was interesting, I have to admit that it dragged on a bit long to me--especially since I was reading this book to try and get an idea of what the show was like. So I wanted to hear more about the plot than about how they found the producers (usually I want to hear less about the plot and more about the making of, but this was a special situation).

That said, the degree of detail that this book goes into in a mere 150 pages was something. I'm less familiar with how stage productions are put together (I read more about movies), so this was all interesting to learn about. And the commentary on the music was one of my favorite things to go through: this production had such a specific musical style that's quite unlike anything else. Then there is all of the talk about that amazing moving stage, the stilts and such, the lighting, the costumes, etc. What a show this was. I regret even more now that I never had the chance to see it.

Yet this book let me almost pretend that I got to see the show. I saw so many more images of it ("Is that what the balrog looked like? It's terrifying," I thought as I turned the page to see the creature of flame and shadow), so many more glimpses into the imagery. Even from still images, I got an idea of movement, of what the choreography was like and what the lighting was like (wow, the Fords of Rivendell must've looked amazing). And all through it all, the songs I long ago memorized were playing in my head. I'm in awe all over again, and I'm transported all over again.

(BTW - It is a testament to the hard work of the team that brought this show together that I hardly ever thought of the movies while reading this book. I know they tried very much to distinguish themselves from the movies [which weren't out yet when they started early work on the show but came out as the production was moving along], and I think they succeeded in creating their own unique interpretation of Tolkien.)