So I was in Las Vegas last weekend for a wedding (a wedding in the close family). And while I was pretty busy most of the time, I did want to make time for two stops: Jean Philippe Patisserie in the Bellagio and Hex Chocolate in Paris across the street. Quite frankly, this was perfect because this area was exactly the area that I spent the whole time in, so I didn't have to go out of the way for the two chocolate places. 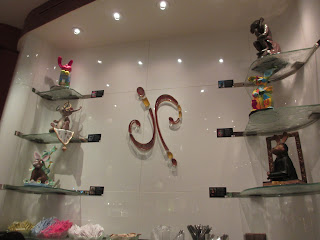 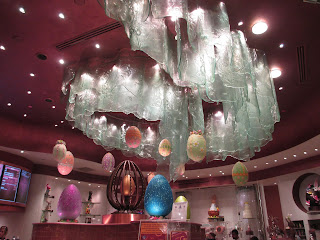 That said, I wasn't able to go to Jean Philippe until Sunday morning. We decided to get crepes there for breakfast, along with some sandwiches to take with us for the drive home. The sandwiches were good, but the crepes were delicious. I chose the souffle crepe, which has a cream filling and comes with either berries, chocolate, or something else (I can't remember what) on top. I chose chocolate, of course. Very good. The chocolate, the cream, and the crepe itself were top notch. I took a chocolate croissant for later, which was also good. 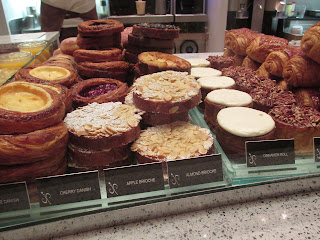 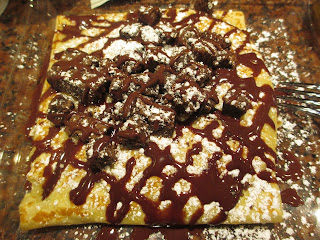 Now let me talk about how the store works. It's an open store, a sort of alcove within the elegant Bellagio halls. No doors and no defined entrance or exit. Lots of displays and things to look at, including their "world's largest chocolate fountain" that held absolutely no interest for me (and therefore I deliberately didn't take a picture of it). There are two registers but depending on the time of day, only one of them might be open. The middle of the store area holds the registers, one on either end, and a big counter where they keep the gelato, desserts, and pastries. The line is right up against this counter, so you can look at everything while you wait. On the walls are shelves filled with beautifully decorated cakes, seasonal displays, and chocolates and candies for sale. The more standard for sale items are on regular shelves so that you can take whatever you want to the register (there were a lot of Easter eggs when I was there). But on one wall were glass cases with locks on them that held the chocolates and truffles and macaroons. 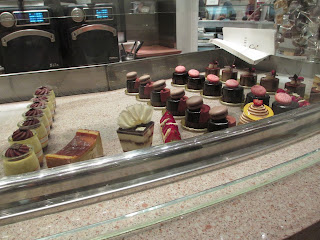 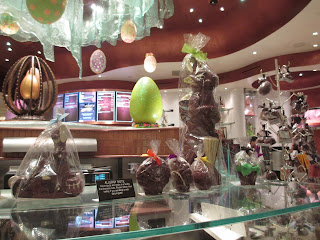 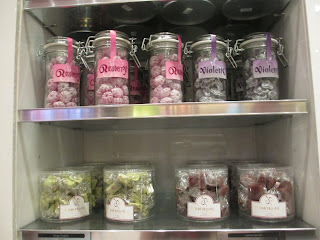 Inside these cases, signs say to ask for assistance. But in a store where you only speak to employees at the register after you've waited in line, when exactly are you supposed to ask for assistance? Since I was hungry (how can people skip breakfast? I start to feel sick if I wait too long to eat), I decided to think about the chocolates later. So that meant that when I came back later, I had to wait in line again. Someone asks for your order just before you get to the register, so I asked her for the chocolates from the case. And here is where I realized that hardly anyone buys from the case. It's possible that she was a new employee, but I got the idea that it was unusual for them to have to unlock the case. She walked over with me to get out what I wanted. I had made a list of the flavors I wanted, even though I didn't see all of them there: I figured that they must keep them elsewhere because why would there be such a big list of their flavors if they only had a few available at a time? 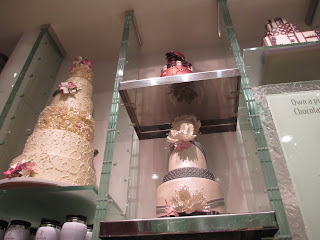 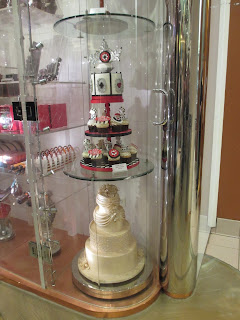 I was wrong. They only had the flavors that were right there, and only one from my list was available. So I had to quickly look and decide on other flavors I might want instead of the ones I'd chosen. Maybe this was my fault, but I still found it odd. So. The woman took my bag of chocolates back behind the counter and continued to take people's orders. And I wondered what I was supposed to do. I'd already waited in line. So I stood sort of by the register, not quite in line but almost. And when the people at the register were done, I quickly went over and asked if I could pay for the chocolates--because I don't think they were going to call me over to pay (they take your name when they take your order, but they never took my name since I didn't really "order"). I think I would have just waited there forever if I hadn't gone up myself. So they definitely need a better system for buying the chocolates out of the case. 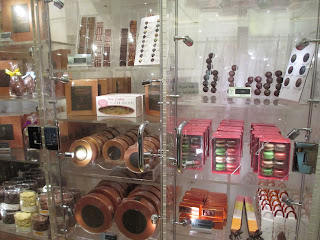 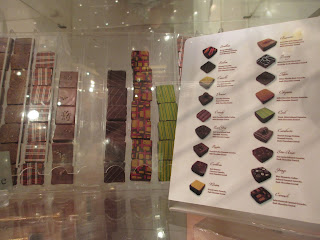 As you can see in the pictures, there were some boxed chocolates. But the displays didn't mention exactly what was in them (and it's possible that the employees wouldn't even have been able to tell me). So I just chose them individually; this way, they come in a bag like the kind they put pastries in. There were also round truffles, but they were in a separate case with its own lock so I, frankly, just didn't want the bother of having to ask for two cases to be opened (do you see how much I hated those cases?). 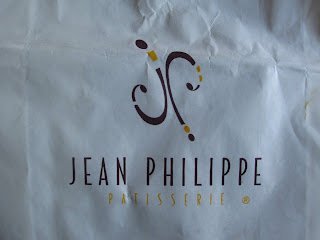 The chocolates are nice-looking. But I get the impression that they looked better when they were freshly made: they're just slightly scuffed-looking. Being loose in a bag doesn't help much, and neither does sitting in a case for who knows how long. If hardly anyone buys the chocolates and if they were already out of most of the flavors, maybe these had already been there for over a week? (Fresh chocolates, as you know, last about two weeks.) Anyway, here is what I ended up with. 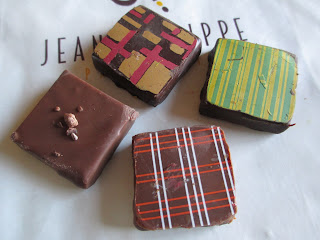 Crunchy - Plaid top with orange - "Milk chocolate waffle praline, milk chocolate coated" - (Wasn't on my list.) This is the only one of the four to have a lighter-colored center. It smells nutty and has a nice, light crunch. However, it has a weird flavor to it. Sure, that flavor mellows out some once the nuttiness and a hint of milk chocolate come in--but why is it there to begin with? If it were some kind of different nut that I'm not used to eating, it would just taste different, not odd and bad. Is the chocolate old, maybe? I don't know, but I didn't even finish this chocolate.

Rustic - Crumbles on top - "Crunch praline gianduja ganache, milk chocolate coated" - (This was on my list.) A dark ganache in this one, and it tastes really good, creamy, nutty, chocolaty--like a pastry creme. Just that slight bit of crunch is there on top, otherwise everything is smooth. If you like hazelnut and milk chocolate (gianduja is hazelnut chocolate, by the way), this one is perfect for you, as it was for me. It melts and disappears quickly, but it's pretty good. I can't get a sense of the chocolate on its own. But I can say that it doesn't taste greasy, which is definitely a good thing. 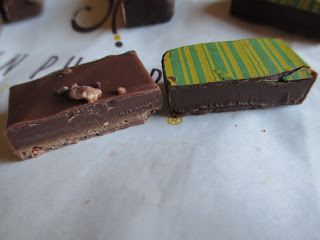 Cool - Dark chocolate with green and yellow stripes top - "Fresh mint-infused ganache, dark chocolate coated" - (Not on my list.) Also a dark ganache here. Once again, it's a very smooth ganache. So you're enjoying that smooth chocolate and then suddenly the mint hits you--I mean really hits you. It's strong and fresh, like when you pull off a mint sprig and put it in your mouth. I hardly ever taste mint like this in chocolate, so it's almost too strong (not really, I'm just trying to describe that particular taste of mint that I come across less often in chocolate). You can still taste the chocolate; the mint doesn't overpower it. They're still a team. So this is one for the mint fans, for sure.  Again, you can't really get a sense of the chocolate's specific flavor or quality on its own.

Caramel - Orange rectangles with thick red stripes on top - "Salty buttered caramel ganache, dark chocolate coated" - (Not on my list.) This center is slightly lighter brown; it looks like another ganache but then you bite in and it is a caramel, after all. A very good textured caramel, too--not free-flowing at all but not at all stiff. It stands on its own but it isn't stiff--that's very cool. And it tastes wonderful. Yes, like the butter, though not too salty. The expected caramel flavor is there, but more fragrant and soft and . . . present. Dark chocolate is only on the sidelines, just adding a little something to richen it up. I'm kind of surprised how good this one is--and to think that I wasn't even going to get it. I should have known that a patisserie would make good caramel. I think it's actually my favorite. Probably one of the best, if not the best, caramels I can remember coming across. So thanks for showing me that caramel can be done really well. 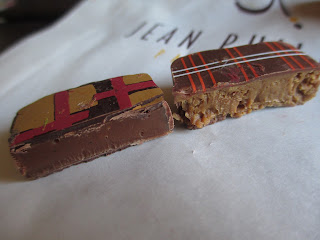 Obviously I have some mixed or otherwise complicated feelings toward Jean Philippe Patisserie. It's a beautiful spot, worth stopping in. As far as the chocolates, they were generally good. Caramel is my favorite, followed by Rustic, then Cool, and Crunchy was just kind of weird. The chocolates are worth checking out--but then again, they also make such good crepes and pastries (and probably desserts, though I didn't get to try any--oh, and I would expect the gelato to be good, too) that you might not really be missing out if you don't get any chocolates. And it'll certainly be easier not to get anything from those cases. If I went again, I would probably get a dessert instead of chocolates or truffles--or maybe just one of the packaged chocolates that you can get off the shelf yourself. If you do get the chocolates, probably try and get the ones that are more related to the world of pastries--that's what this place seems to do well and that's why the Caramel was my favorite. Quite frankly, even after eating the chocolates, it's still the flavor of that chocolate souffle crepe that I have in my mind; it was the best.
Posted by Deanna Skaggs at 11:50 AM