I feel a little guilty for missing Disneyland when it hasn't even been a year since I was last there. But that's just how Disneyland is: it gets into your mind and becomes like another home, a place you instantly feel at ease in and a place that you remember . . . in every detail. 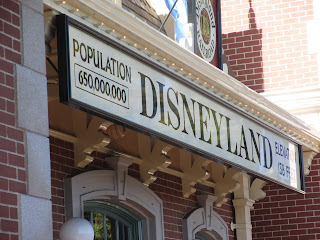 When I was homesick for Disneyland, I used to sit in my closet (I had a little step-stool in there, so sometimes I would just sit there and read; obviously I'm not claustrophobic) with my headphones (and CD player, I might add) while listening to the Disneyland soundtrack. The Space Mountain track was my favorite, because I could close my eyes and imagine I was on the ride; I would picture all the twists and turns and changes in speed and it was almost like being there.

I don't listen to the soundtrack as much anymore (though I almost never skip Walt Disney's Dedication of Disneyland when it comes up under shuffle). What I do now is incorporate Disneyland into little moments of my daily life when I need it. I have the place so memorized that sometimes I just imagine walking down Main St. and seeing the lamp on above the fire station, or looking out over the lagoon in Tomorrowland, or catching a glimpse of Matterhorn when the doors open on the Tower of Terror. Just for a second, I picture that I'm there--and it makes me happy, it makes me feel like even if I'm not there, Disneyland still is--and that is good.

I don't always know why this place has such power, not just over the time that you spend there but also of the time that you are away. Part of it is memories: we make a lot of good memories in Disneyland. But when I think about Disneyland, I'm not always thinking about the memories. Sometimes, yes. Sometimes I think about the time we had a contest drawing pictures of Disney characters while waiting for Fantasmic, or when we all went through every tunnel together on Tom Sawyer Island. But these are times of family and friends (and don't get me wrong, I definitely treasure these times). Other times I just want to think of Disneyland, of the place and of the symbol it is.

And because I am so strange, I just had to dig out a sonnet I wrote about Disneyland for English class during freshman year of high school. I mean, what is a fourteen year old supposed to write a sonnet about? So I tried to just do something silly and fun. I share with you the results (I got a perfect grade on it, by the way).

As I stand at the gates of Disneyland,
I feel my journeys there coming to mind.
Of being there by chill December winds fanned,
or beneath the hot rays of summer kind.

I find myself near pleasure to abide.
A day ahead spent in high elation
and far from the worries of Outside.
Even for one day of jubilation.

There to dwell where so much detail was done
to make it seem, though not, the perfect place.
Now shining for us it stands in the sun,
the wondrous results of their hard work's pace.

Not to go in again I couldn't bear,
This splendid place of Disneyland the fair.

You see what I mean? I didn't talk about any of the "details." All I talked about was the idea of Disneyland. And sometimes it's just the idea of Disneyland for which I am homesick. Sometimes, as desperately as I want to ride the temporary Star Wars version of Space Mountain or go get a mint julep in New Orleans Square before getting in line for Splash Mountain, all I really want is to ponder the idea of what Disneyland was, is, and will always be.
Posted by Deanna Skaggs at 10:08 PM